Jim Denevan makes temporary massive scale drawings on sand, earth and ice that would be eventually erased by waves and weather.  His creation is not placed on those landscape, but he is making the landscape a form of art.  His artwork is not long lasting so photography and videos are always used for recording his work.  He is also organising the Outstanding in the Field, which is a series of farm dining trip.

This is the world’s largest single artwork that Jim Denevan created with the commission by The Anthropologist, drawing on the landscape of Lake Baikal, the oldest lake in Russia.  The largest before this one was the 9 miles drawing in the desert of Nevada. 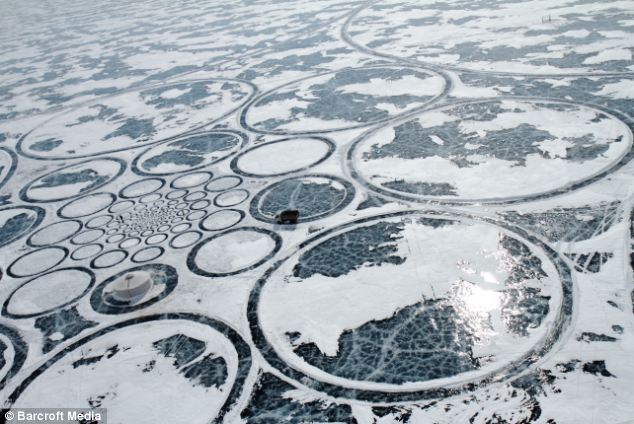 10 is 12.5 square miles with over one thousand separate circles in several sizes, spending 15 days on the surface of the frozen lake to complete the landscape drawing.  This is a kind of mathematical art that needs adequate calculation on the circles drawing in these large size.  Jim Denevan set the pattern as Fibonacci curve, using snow ploughs for the large circular lines and shovels,bikes to complete the small one.  The smallest circle is just 18 inch for circumference.
There is also another artist doing similar work on the landscape, Robert Smithson.  His monumental earthwork Spiral Jetty was located on the Great Salt Lake in Utah. Using black basalt rocks and earth from the site, the artist created a coil 1,500 feet long and 15 feet wide that stretches out counter-clockwise into the translucent red water.  Some artists are making use of the landscape for their creation too, but it seems more about integration for Jim Denevan.

This creation also reminds me about the accuracy of crop circle.  Crop circle is always sizable pattern created by the flattening of different crop, with formations in mostly circular shape.  It appears in different countries, different places, around 10000 crop circles are reported through 20th century.  Someone claims that it may be man-made as archaeological remains can cause cropmarks in the fields, in the shapes of circles and squares, but they do not appear overnight and they are always in the same places every year.  Some may said that it is the message left by the ET to us, or the damage causing by the landing of UFO.  No matter the truth is, now artists can create something like that.  It aims to show the beauty of our planet.
It is a new way to show the beauty of our world, mixing the human effort.  People can merge with the natural environment through art form.  Jim Denevan always stands in the middle of his work and shows the combination of his work, between the landscape and the human.  It also reminds me a bit on the mandalas that buddhist monks draw in the sand area in Asian region and which are also erased through thousands of years. There is something eternally touching about beauty and transience on the landscape of the world.