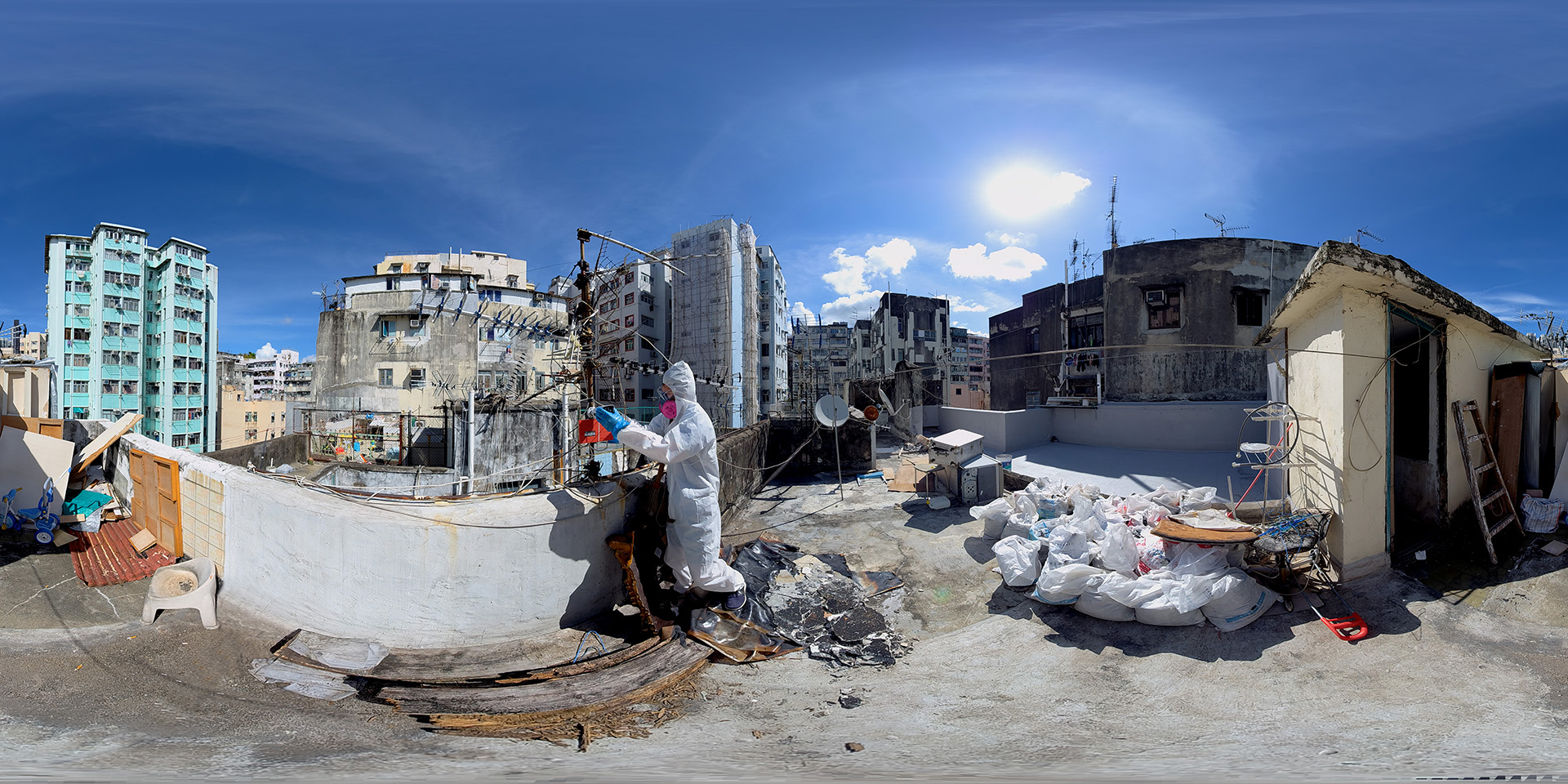 Hong Kong Escape Views, Interactive installation, 360 videos. High-Res video panoramas of Hong Kong reveal the unseen. It is no longer about density, verticality, finance, and technology. At a time of the pandemic, places of seclusion are sought after. But what are people protecting themselves from? Promiscuity? Contamination? or surveillance? Even the most remote places can’t escape from the World panopticon.

Hong Kong Escape Views, Panoptical Memories are inspired by prior projects like Art Impact, 2000, at the Pompidou Centre in Paris, where people painted their gaze watching in VR a contemporary Art Exhibition, together with environments of the daily life like supermarkets, slaughter house, a quarry, creating, in the Duchamp’s sense of the terms, a competition of retinal seduction. The supermarket won so many times when compared to art installations… Then So.So.So., Somebody, Somewhere, Some Time, 2002, a narrative version of the concept presented for the first time at the ZKM, Karlsruhe, in Future Cinema exhibition curated by Jeffrey Shaw and Peter Weibel. The story was written in real time through the experience of watching situations. Later, 2005, Cosmopolis, Overwriting the City, presented across China, (Shanghai, Beijing, Chongqing, Chengdu), 12 VR telescopes offered to the public to mix 12 cities around the world, keeping the best of each in terms or retinal seduction.

Stemming on the concept of creating a dynamic palimpsest based the experience of watching, Escape Views, Panoptical Memories, show first an unexpected vision of Hong Kong, places of seclusion, attempts of isolation, sometimes unfruitful, that fits so well the idea of escaping the pandemics and, at the same time, the political evolution of the City. In the remote places – one can feel isolated in its professional milieu, as we can see in Osage Gallery during the Ars Electronica Planetary Wine tasting Party, dealing with online friends and relatives mixed with on-site partygoers – we see a recurrent character, dressed in a white protective suit that seems to haunt all the most remote places of Hong Kong. Difficult to know if he protects himself from any kind of contamination or try to protect the other. Careful visitors may notice that everywhere he goes he is installing surveillance cameras. The boundaries are difficult to draw between health and political control. We try to escape the city, the density, and potential viruses with their collection of constraints, and there are still people to add constraints to the constraints. We watch all around us thanks to the 360-video recording, and we understand that we are visually controlling the environment, as a potential prey protecting itself from potential predators. We may consider as predators those who protect themselves wearing PPE, unless they are instruments of power. Watching them installing the tools to watch us is an uncanny situation. Tracking the trackers, we are trapped, and the Panoptical Memory is collecting the traces, the footprint of our intimate experience of watching, something that belongs to our most intimate experience of the world. Even if the tracking systems are becoming stronger and denser, reducing the size of our cells of freedom, we are already denouncing ourselves by leaving the traces on the large palimpsest of our retinal wandering. This is where the “gamification” of the experience betrays, and reveal, the ever-growing society of control. As we go from one panorama another by pointing at least twice to the surveillance builder, the public starts tracking him on the panoramas. It is a way to see more but also to print the image of this ghost of isolation. On the Panoptical Memory the repeated image becomes more and more present up to become the dominant feature of the resulting palimpsest. The regardeur-regardé, the controller-controlled are both sides of the same coin, and the resulting mise-en-abyme reflects on the reality of the ever densified invisible web that makes each of us bouncing between watching and being watched, trapping and being trapped, freedom and servitude. 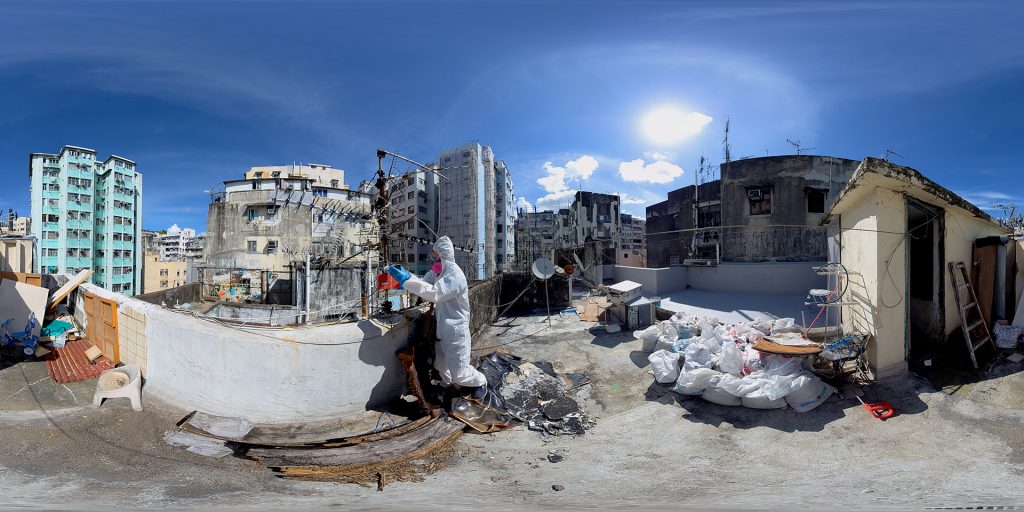 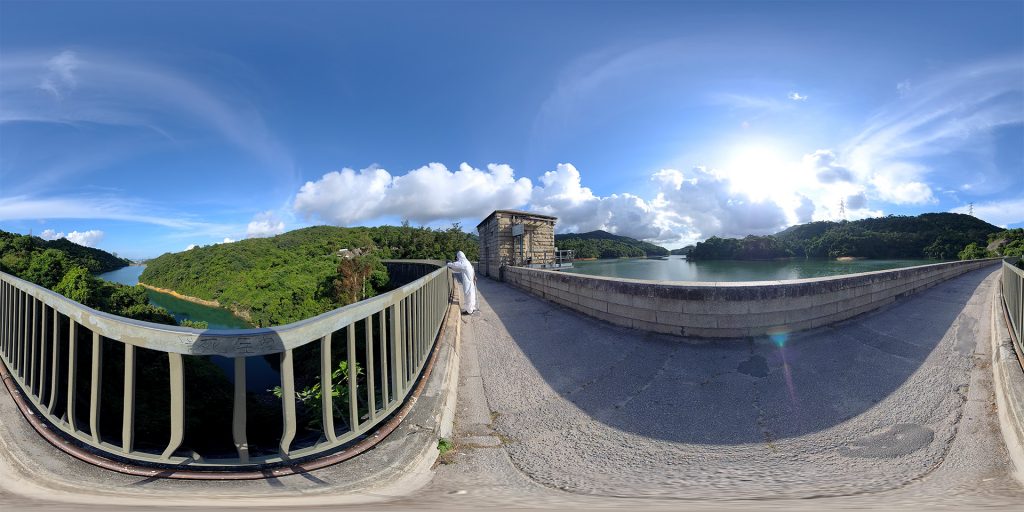 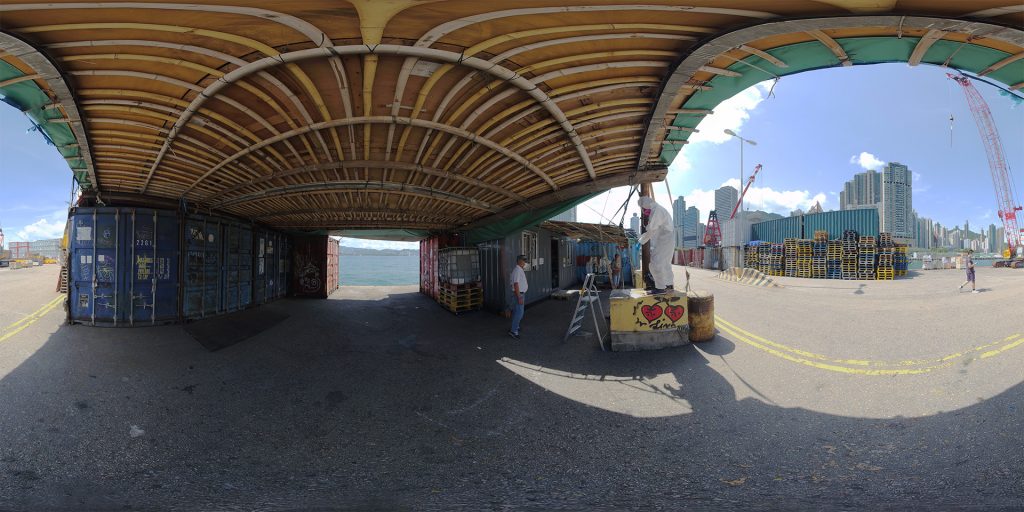 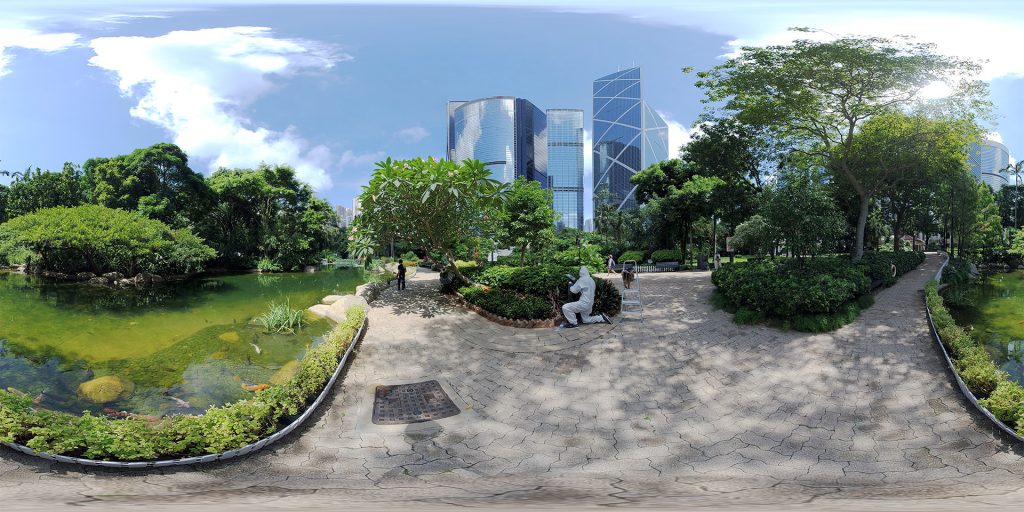