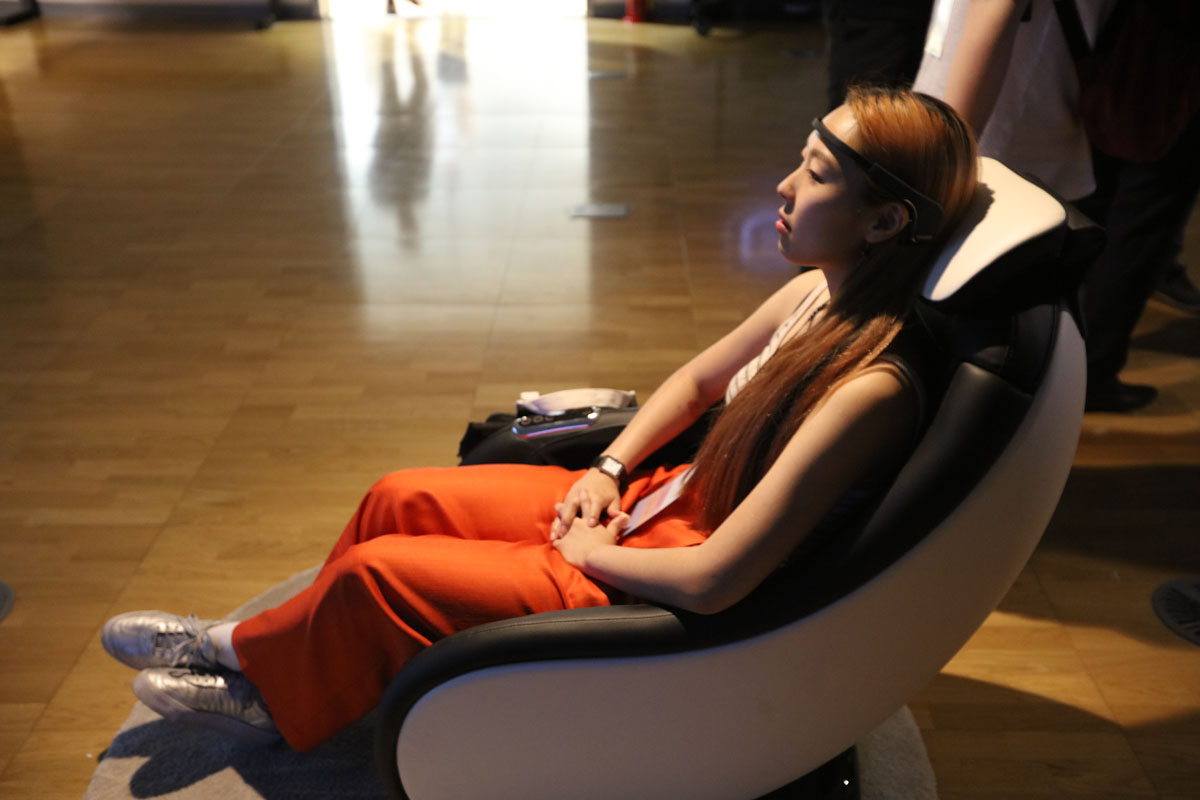 Juin 2019 - Posted in Exhibition, Transactional Art by moben
Share
ISEA, International Symposium on Electronic Arts is the major academic event on Media Art, research and creation. Value of Values is an invited artwork curated by Art Center Nabi for the Lux Aeterna Exhibition.
« Value of Values (VoV) is a blockchain-based art project. It aims to find out the real, economic value of human values through EEG
(Electroencephalography, and biofeedback). VoV is an extension to the acclaimed Brain Factory project. In both, exhibition visitors (aka Brain workers) give – straight from their brain waves – a three- dimensional shape to abstract concepts, like FREEDOM, PEACE, MONEY, LOVE, POWER.
ISEA, International Symposium on Electronic Arts is the major academic event on Media Art, research and creation. Value of Values is an invited artwork curated by Art Center Nabi for the Lux Aeterna Exhibition.
In VoV, the resulting shapes are brought into the context of an “ethical realism”, an objective representation of the individual and collective hierarchy of values. While Brain Factory deals with a wide range of human abstractions, VoV only gives shape to those that could be considered as human values. The neuro-designed shapes, produced by individual visitors, become named and numbered digital 3D models: FREEDOM 0001, FREEDOM 0002… FREEDOM 000X. Each numbered item is an artwork registered on the Blockchain. At the end of the process, the Brain Worker, the shaper of the value, becomes the owner of the Blockchain VoV and the owner of the 3D model, the “idea” of the shape. VoVs are convertible into Ethereum, a common crypto currency. The owner can sell or barter the VoV, or even freely use the shape to produce artefacts, artworks, or goods.
During the process, the visitor of the art show has become an artist giving shape to ideas, a curator validating the model according to the abstract concept, a collector preciously keeping the freshly minted token, an art dealer selling or bartering pieces of one’s collection of values for more “valuable” ones barter them for MONEY0088, he or she defines the relative value of all the involved values.
With thousands of similar transactions, we can monitor in real-time the relative value of human values, for one person, a region, a country, a continent. If the median price of MONEY (i.e. the median price of all minted MONEY tokens) is 3 ETH or 1200 USD and the median price of LOVE is 240 USD, we get a clear idea of the relative value of these values. The observation of the trading process produces real-time monitoring of human values in their transactional milieu. VoV is at the same time a real currency, a critical metaphor of the art production narrative, and a dynamic reflection on its founding ontology. Value of Values (VoV) explores the nexus of human creation, the value systems of artistic production, and our insatiable desire for reified representations of human thought.
The result is a Global Art Project based on Critical Fusion, the speculative and convertible merging of Fiction and Reality. »
<About the Artists>
Maurice Benayoun (MoBen, 莫奔) is a conceptual media artist based in Hong Kong and Paris. Pioneer of new media art, his work has been a continuous attempt to redefine art practice and the place of the artist in Society. Through VR, AR, AI and urban media art, MoBen explores the limits of the promises of advanced media, unveiling their societal impact beyond their technological and aesthetic potential. Creating subtle though spectacular interactive artworks, he has been exhibited in major international museums, biennials and festivals in 24 countries around the World. MoBen received close to 30 awards including 4 Ars Electronica awards (and the coveted Golden Nica). Since 2012, Maurice Benayoun is a professor of Creative Media at City University of Hong Kong.
www.moben.net
Tobias Klein works in the fields of Architecture, Art, Design and Interactive Media Installation. His work generates a syncretism of contemporary CAD/CAM technologies with the site and culturally specific design narratives, intuitive non-linear design processes, and historical cultural references. His works are exhibited internationally at the Venice Architecture Biennale, the Antwerp Fashion Museum, the London Science Museum, the V&A, the Bellevue Arts Museum, Museum of Glass, Museum of Moscow and Vancouver. He currently lives in Hong Kong and works as an assistant professor at the School of Creative Media, City University of Hong Kong.
Nicolás Mendoza is a Colombian multidisciplinary scholar, architect, artist, researcher and investor. His PhD research explored the structures that support the emergence of non-state currencies, such as blockchain technology, from an anthropological perspective. His research engagement with Bitcoin and therefore with blockchain technology began as early as 2010, serving in the editorial board of Bitcoin Magazine, and co-editing the issue on P2P Currency of the Journal of Peer Production in 2013. His writings have been published in platforms such as Radical Philosophy and Al-Jazeera.
from Art Center Nabi website: http://www.nabi.or.kr/en/page/board_view.php?