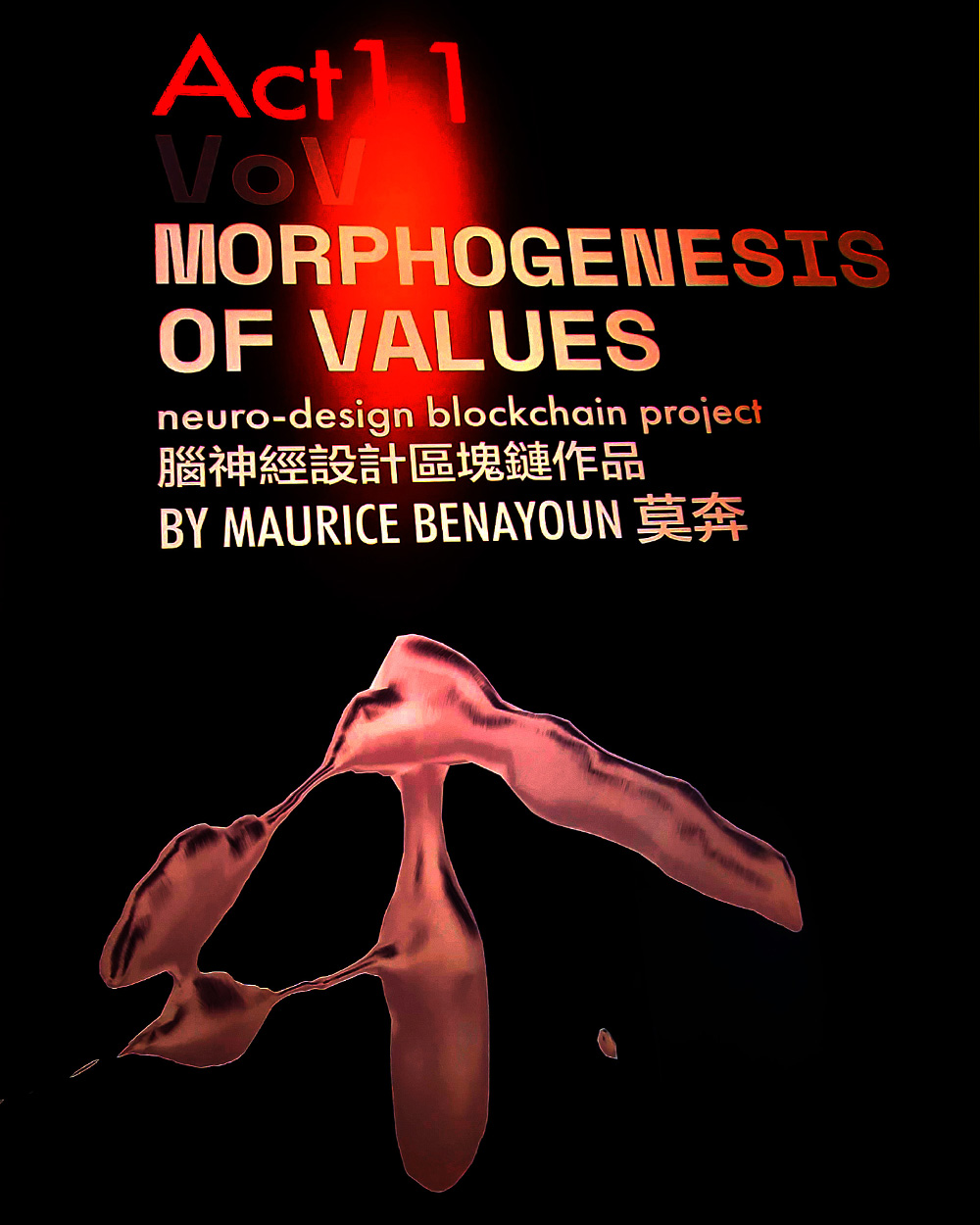 Osage Art Foundation opens HKACT! Acts 11-13, as part of its HKACT! initiative (Hong Kong Art Culture and Technological Innovation). This platform, raised in 2015, celebrates the convergence of art and advanced ideas by bringing together visionary thinkers and innovators to articulate a vision for the future through experimental, artistic, and educative projects. 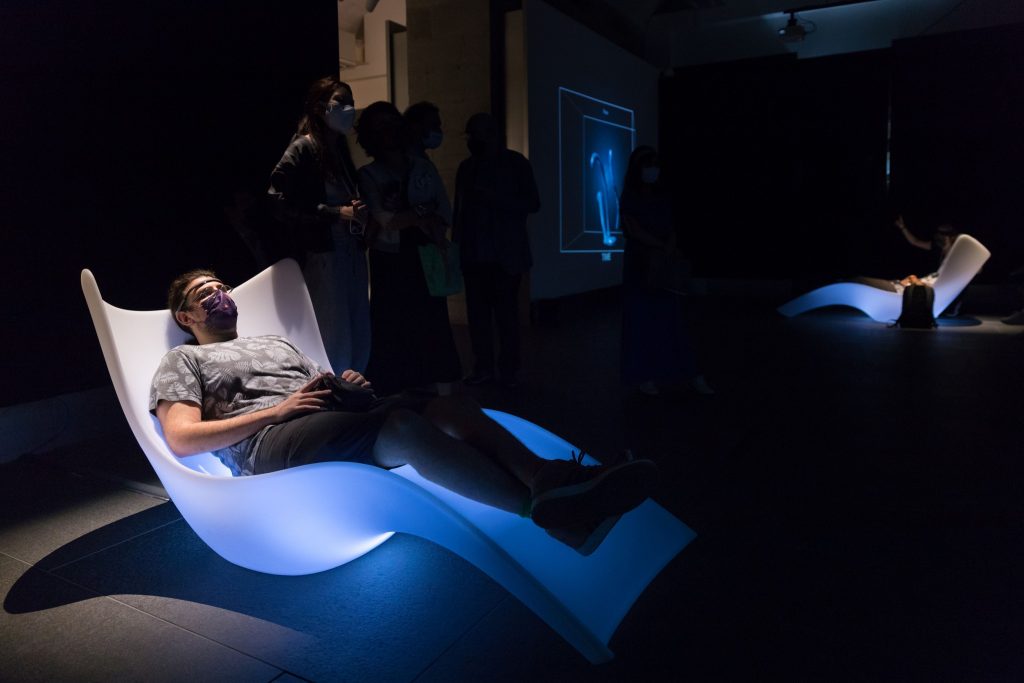 The Brain Workers in action with the Neuro Design stations. They are neuro-designing human values. They will receive 2 VoV NFT tokens for the contribution. 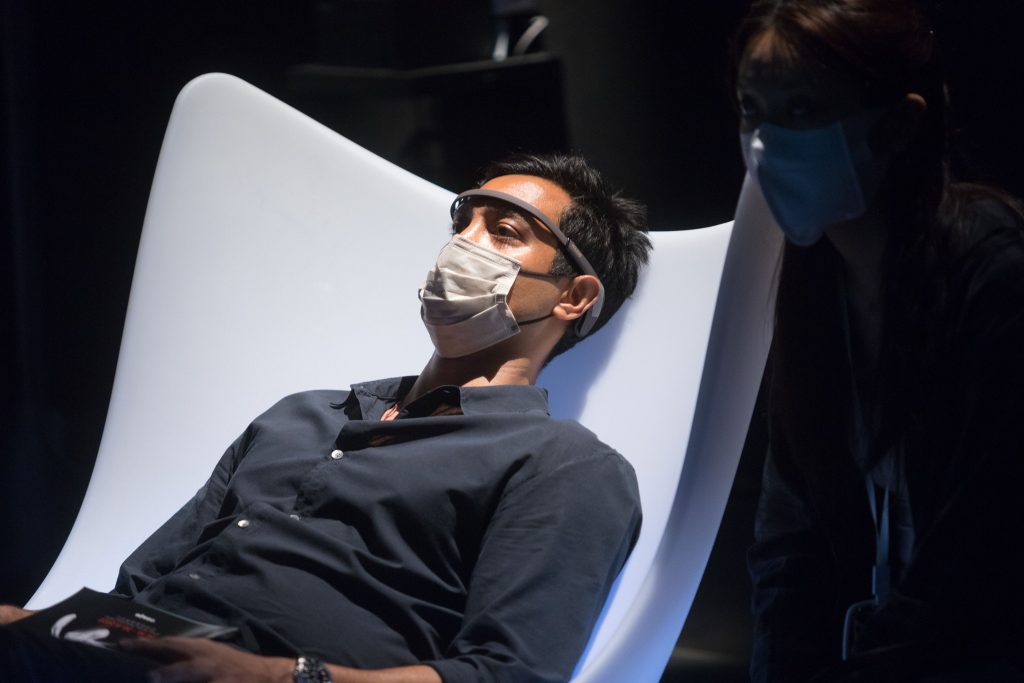 A Brain Worker in action… Pretty laid back but intensely focused. 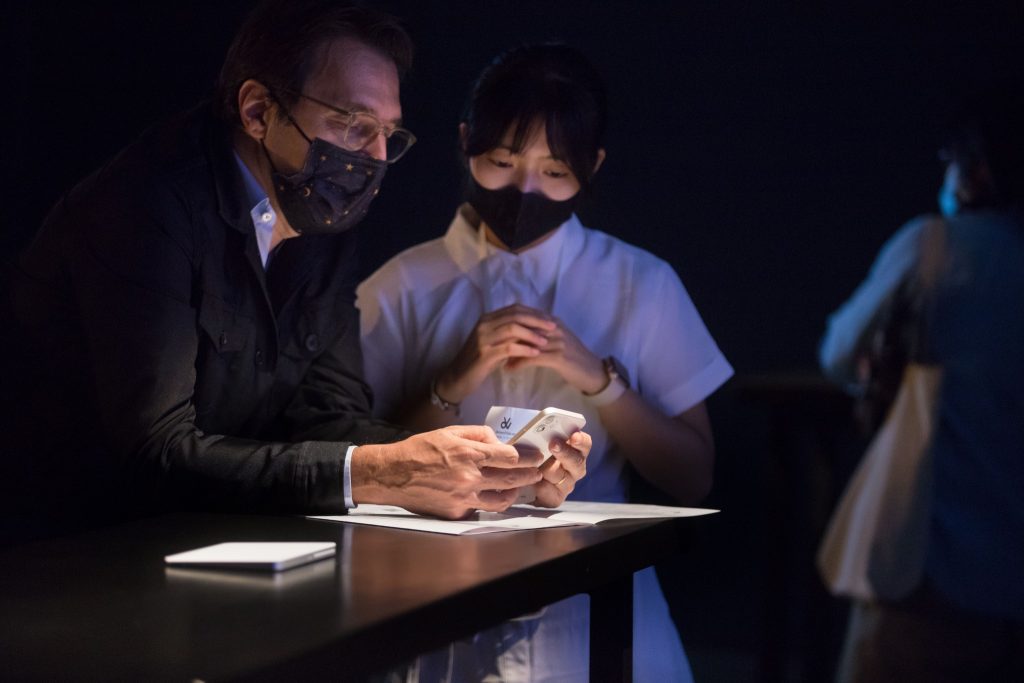 After the Neuro Design of values, the Brain Worker can scan the QR Code to get automatically the VoV Token added to his NFT. 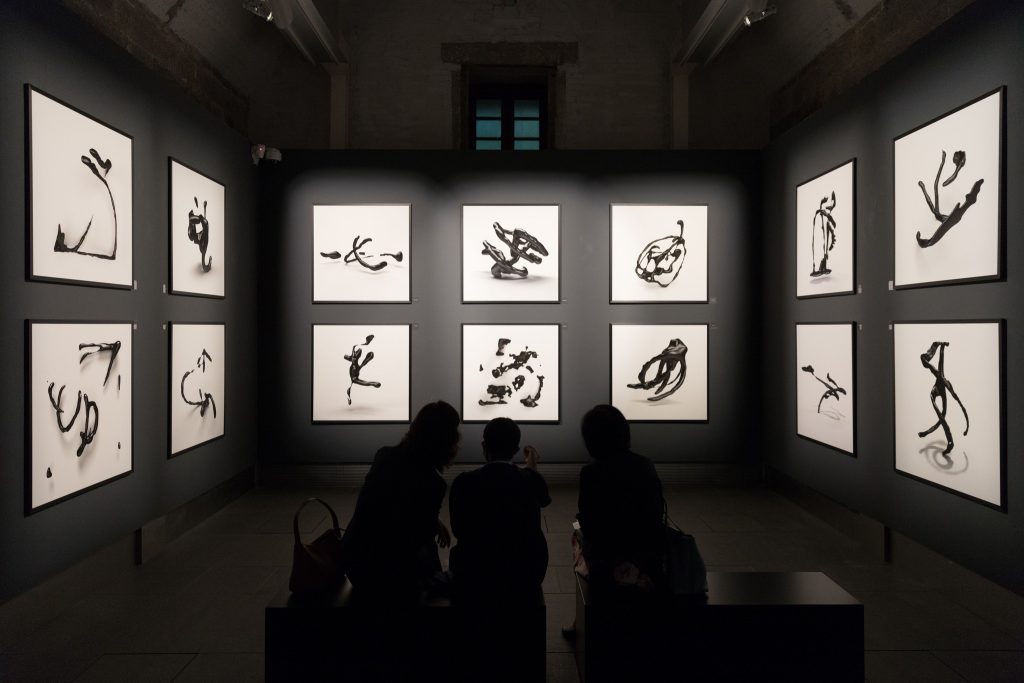 Your VoV tokens are like characters representing human values. They are 3d models. You can freely convert into « twodees » (2-dimensional images) or « Threedees » (sculpture or volumetric installation): Here are 14 Crypto Characters at the show. 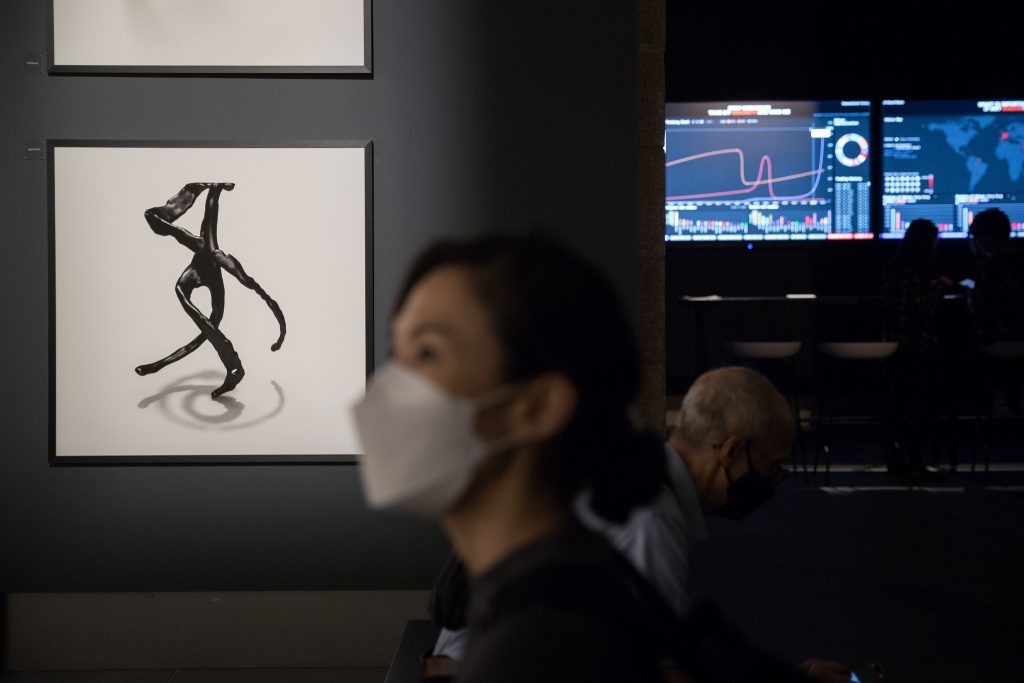 Crypto characters and the Trading Room. 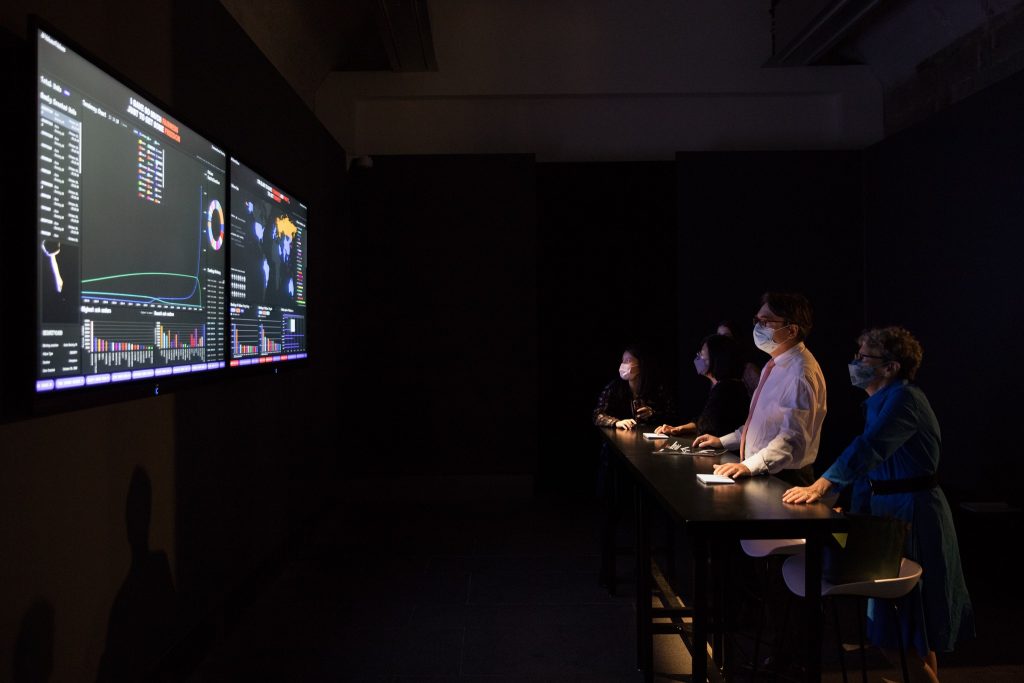 The Trading Room is where Brain Workers and Collectors can trade their VoV NFT tokens. Swap, sell and buy! You get all data about the world’s ranking of values and compare the ranking between cities and countries. Observe the market trends… 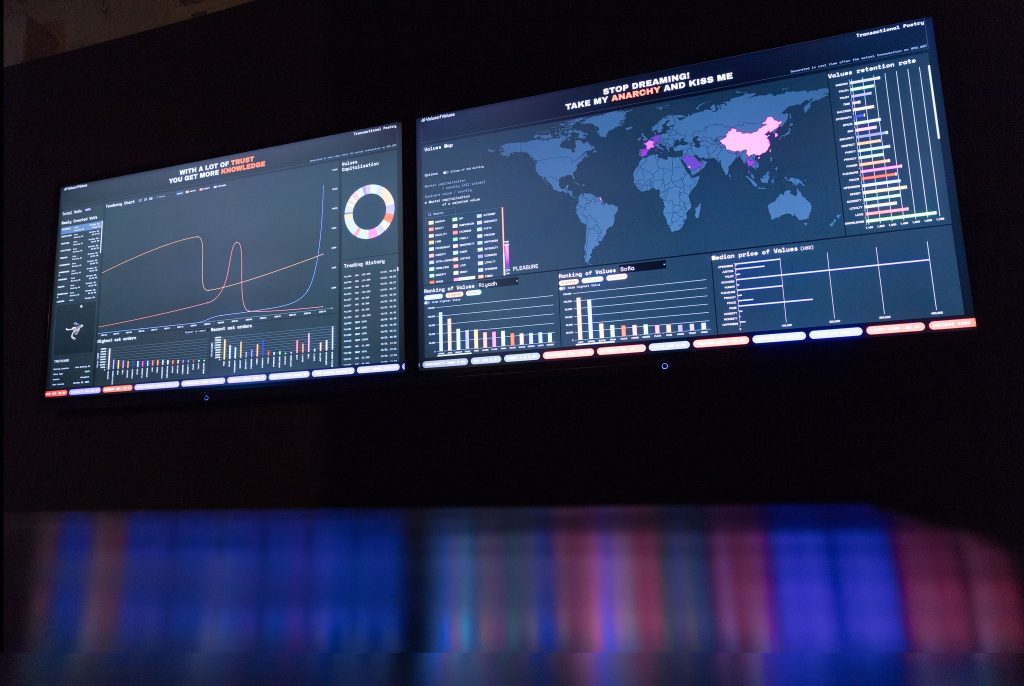 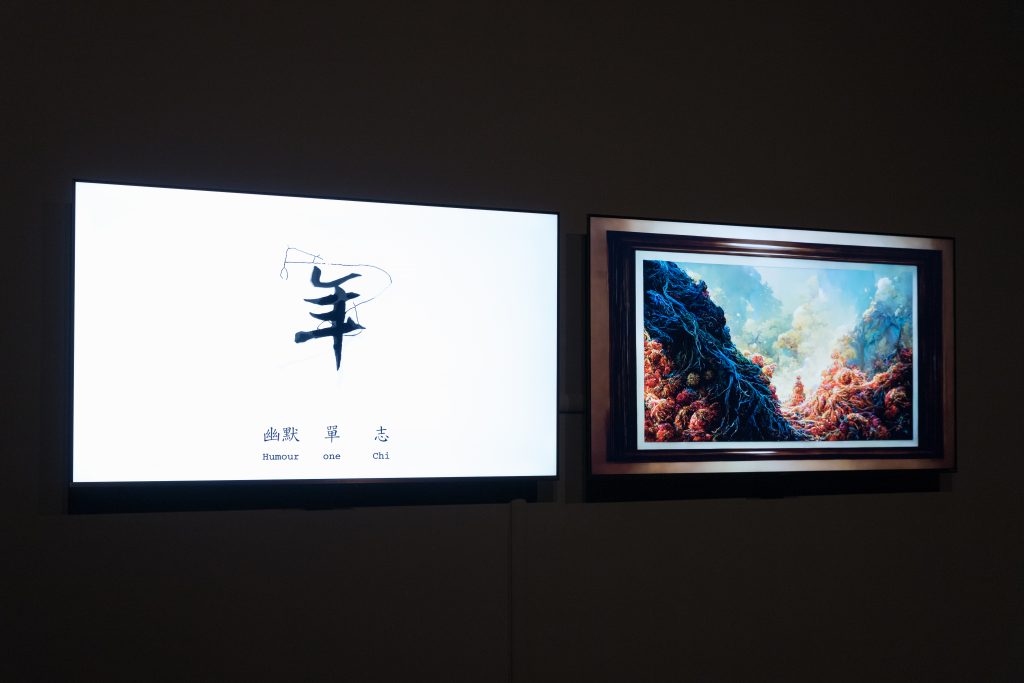 Can we read the human brain?
Observing the VoV token, the ‘Reader’ recognized words. The Interpreter will try to make sense of it. Interpreters are not neutral, they have biases. An ‘AI visual interpreter’ with a strong art bias will suggest images out of the words provided by the reader. An ‘AI textual interpreter’, with a strong marketing bias, provides the subtitles, trying to sell values as commercial products. They follow their path and meet on the screen without collusion.
Machines try to understand humans that strive to understand machines. 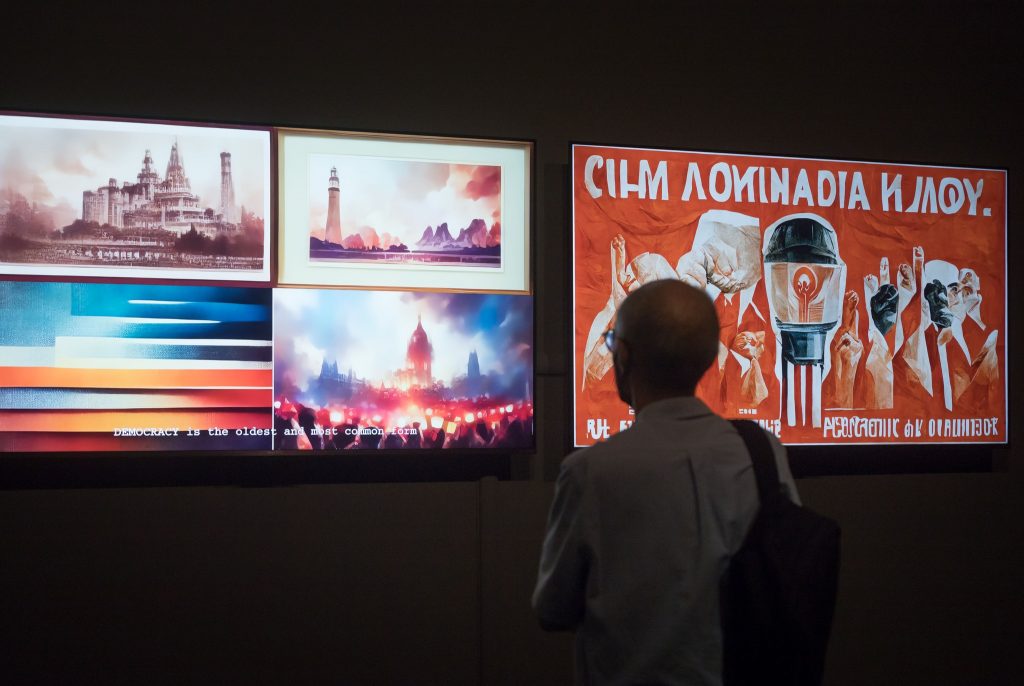 The AI Interpreters working on « Democracy » 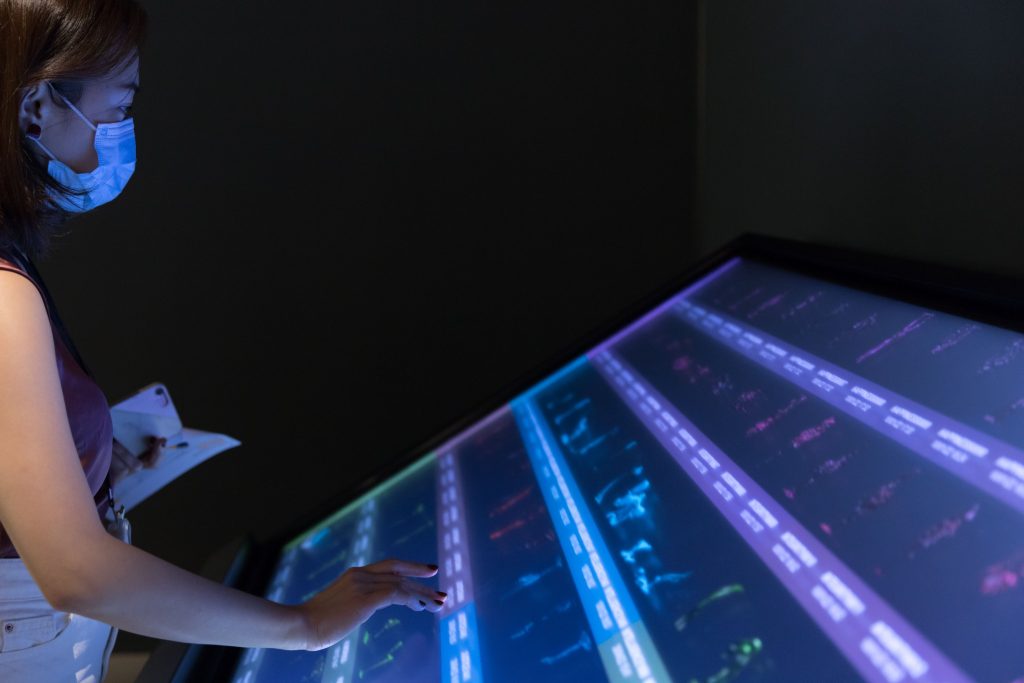 The VoV database with more than 60,000 VoVs to explore in 3D 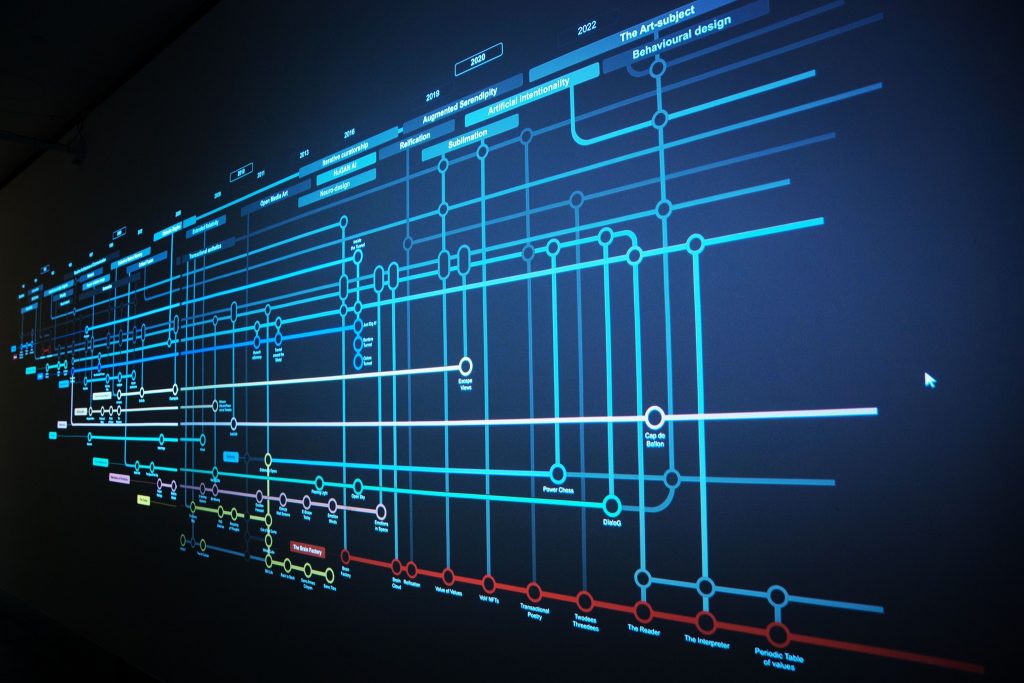 The Conceptual Timeline: A subway map of 40 years of media creation, the artist shows the concepts behind his artworks and his intention to go beyond technology. 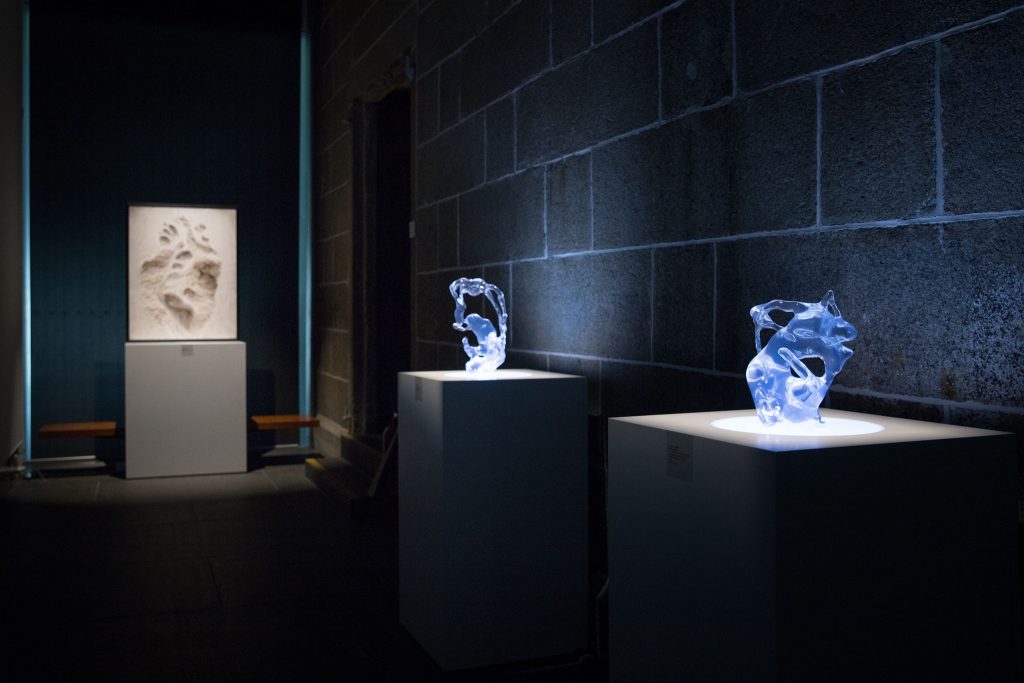 VoV Reifications, 2 sculptures by Klein To Generosity0001 and Openness0001 3D printed out of Tobias’ personal VoV collection. In the back, The « Footprint of Freedom » by MoBen 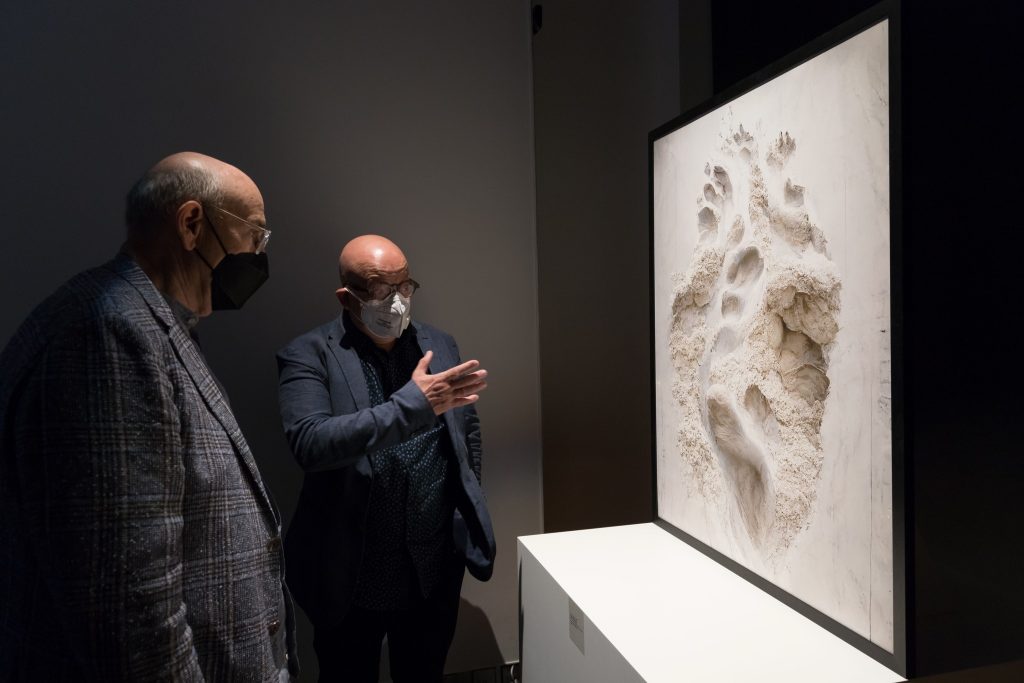 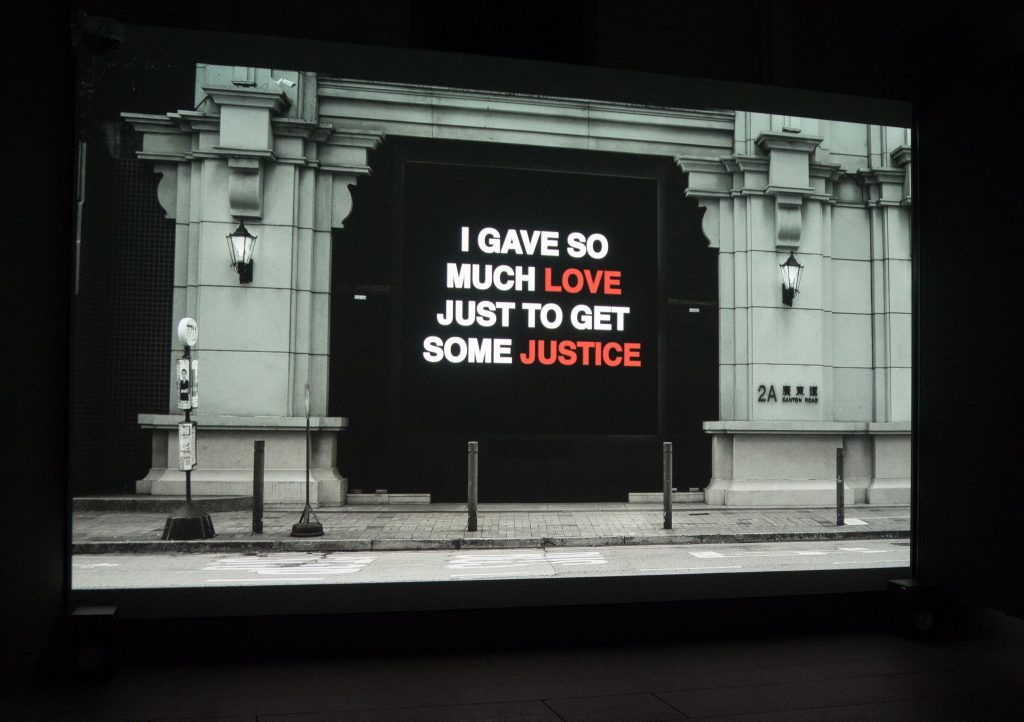 “Human abstractions live in our minds. Human values, such as Love, Power, Peace, and Knowledge, are human abstractions. If making art is the process of giving shape to ideas, we could perhaps do it differently: We can shape human values directly from our minds, controlling the form just by thinking!

Brain-Computer Interaction (BCI) makes neuro-design possible. This “Morphogenesis of Values” (MoV) goes beyond the traditional culture-based representations (i.e. an allegory for Liberty, the red pictogram of the heart for Love…). Each human value can be considered as a dynamic living form. Its ecosystem is the human mind. Like Nature assessing the evolution of living forms, the Brain – thanks to EEG (Electroencephalography) – can assess forms and their relevance in representing abstractions and values. The resulting fluid shape submitted to dynamic forces is like thought in motion. Eventually, the generated forms become Non-fungible Tokens (NFT) on the Blockchain, opening the path for new market forces to drive the trade of Human Values. From Sublimation (dataism) to Reification (commodification), artworks can now penetrate strata of human activities that were so far out of the artist’s reach. Ethics, Finance, Politics, and Philosophy become, thanks to transactional practices, the new playground for artists at the world level. The process of neuro design can be considered as Hu-GAN, where the now common AI GAN (Artificial Intelligence Generative Adversarial Network) opposing a computer-based Generator to a carefully taught computer-based Discriminator may hand the status of discriminator/curator over to the artist. In the Brain Factory and Value of Values (VoV), it is the human brain that plays the role of the Discriminator. In the curatorial process involved in AI-generated Art, the artist steps back from the position of designing concepts and uses new tools similar in role to an artist’s paint tubes in the form of “concept tubes” or “rhetoric tubes,” spreading ready-made tropes. The Reader deciphers the characters, and two Interpreters visualize and comment on the resulting sentence. Each of them is affected by a specific bias – what I call Artificial Intentionality – that orients the generative process. One visually interprets like an “art critic”, and the other writes subtitles like a “marketing expert”. Curating variations to orient the evolution of constantly evolving shapes may have become the new paradigm of the artist’s practice. Swapping the positions in this machine-human confrontation, the artist exposes his 40 years of practice, mapping it on the like of an art processor.” (Maurice BENAYOUN)

HKACT! Act 12 VoV: HKRUNWAY – Claiming Values in the Cloud is a transdisciplinary fashion show that engages the public in a techno-ethical experimentation of fashion design. 20 fashion designers from Hong Kong Design Institute (HKDI) have been invited to give shape to values through the neuro-design process of VoV and create new forms of fashion inspired by the values they have shaped. As a public skin, fashion allows people to claim their values expressively. The outfits, captured in 3D by photogrammetry, were then immersed into a Virtual Reality (VR) environment designed by Alexey Marfin. VR, fashion models, live sculpture, dance, and transactional poetry merge to present the VoV Collection, allowing the audience to seamlessly navigate between reality and virtuality, mimicking their real-world counterparts. The virtual is there to remind us about the fight for values that should not be lost in the cloud.

HKACT! Act 13 Symposium is a full-day symposium, titled “Multiple Futures of Art and Technology” focusing on art, philosophy, and technology. Nine speakers are invited, including scholars and artists, from Europe, the Americas, and Asia.

Globalization has meant, historically, a process of neutralization through economic and technological means by conquering land, sea, and air. The invention and proliferation of digital technologies in the second half of the 20th century has accelerated this process, as demonstrated by the Sino-American relationship. At the same time, digital technology has become the most pervasive and ubiquitous medium now indispensable to everyday life. Both the state and capitalism demand and produce techno-social subjects – who are consumers, but not citizens. It is recognized that technology is not neutral. It is a new regime of discipline and containment based on computation, which has brought us convenience as well as platform capitalism, enforced surveillance and mass data extraction.

As a way to counter this homogenization, it is crucial to imagine a new form of globalization, to imagine a techno-diversity or multiple cosmo-technics, by resolving the antinomy of the universality of technology.

To include people in different localities to participate in the production and sharing of knowledge, and allowing them to actively appropriate technology instead of being reduced to mere consumers. This is essential to maintaining local heterogeneity as well as politicizing the innovation and employment of technology, which allows us to resist homogenization assumed by capitalist logic and the technocratic.

To bring forward a new phase of globalization means going beyond the previous unilateral process of globalization and the technological dystopia accompanying it. It requires rediscovering and inventing new configurations between cultures and technologies, tradition and modernism, east and west. It is a call that not only addresses politologists but scholars in art and humanities, as well as those in engineering and sciences. It demands a re-evaluation of the limits and potential of the current algorithmic culture and its algorithmic governmentality from new perspectives.

This symposium invites scholars and artists to conceive such possibilities by reflecting on the conceptual and practical contributions from both the East and the West. It seeks to contribute to overcoming the universalist and homogeneous idea of technology, which impoverishes our capacity to think. 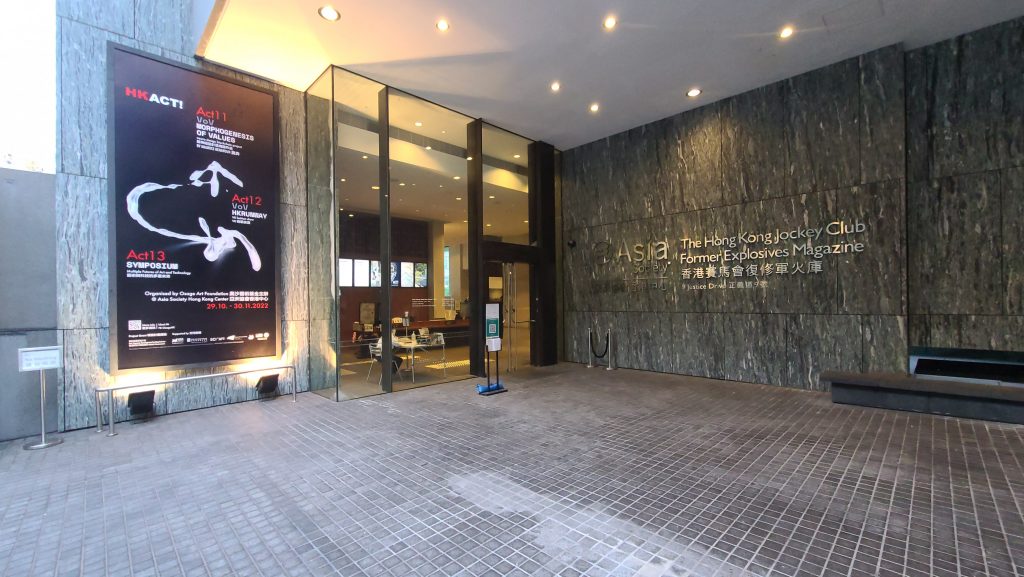 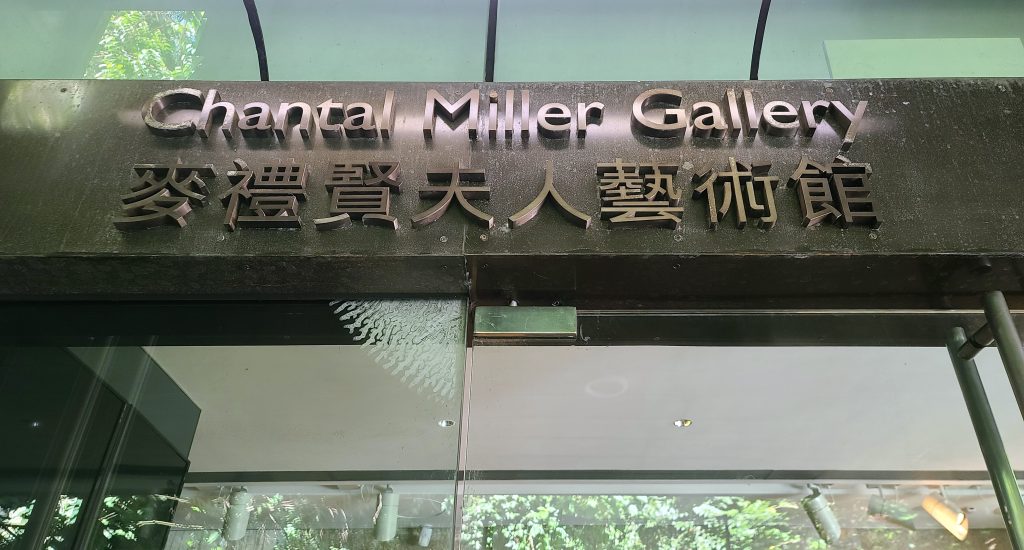 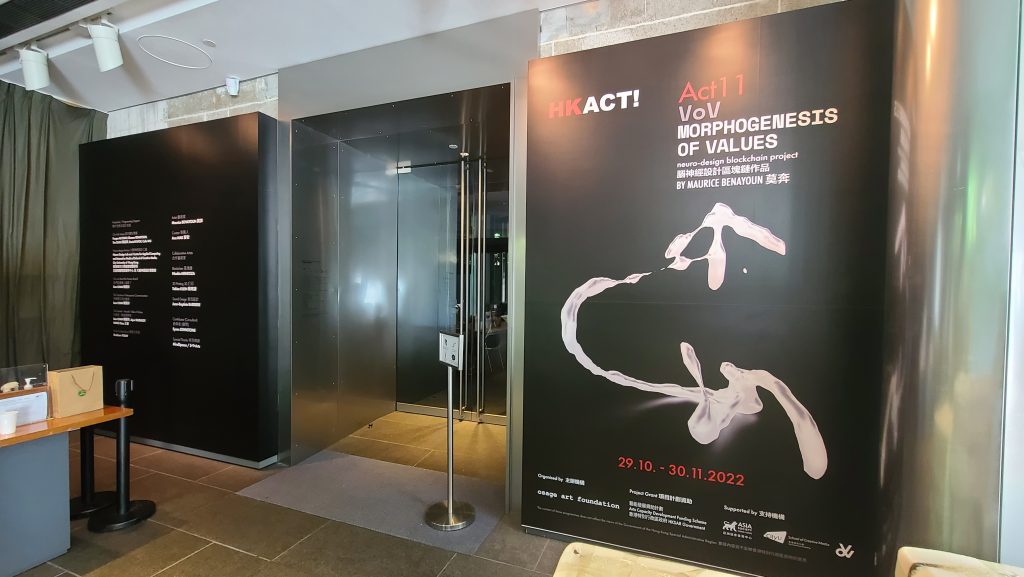 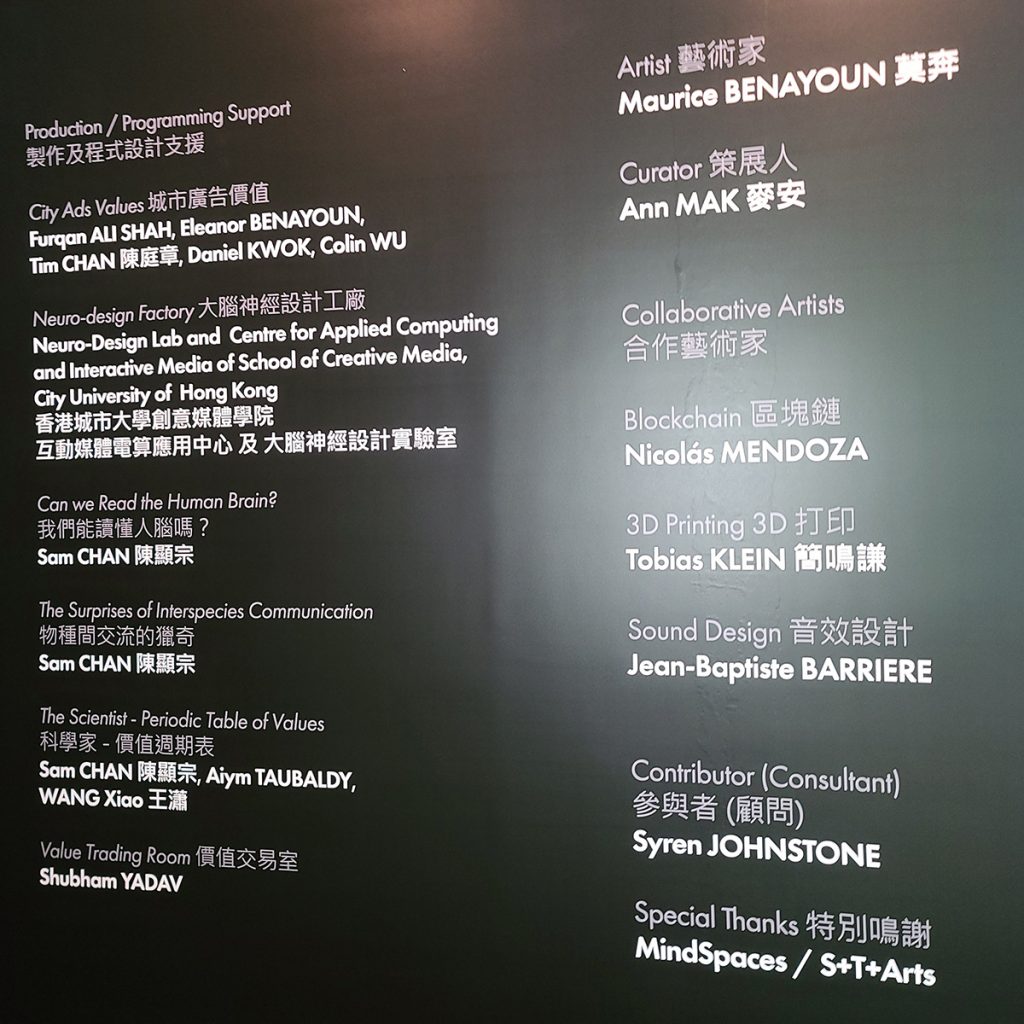 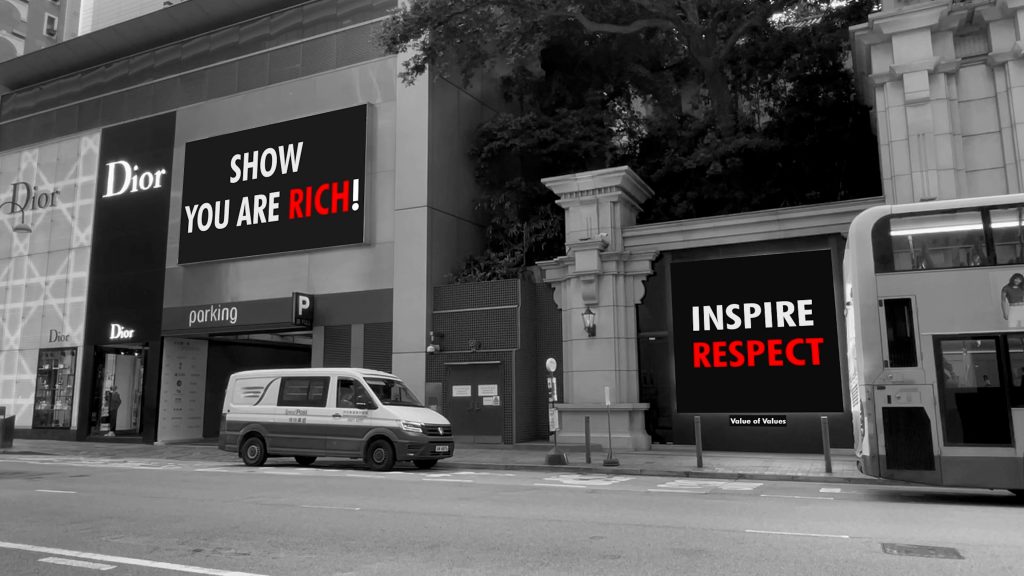