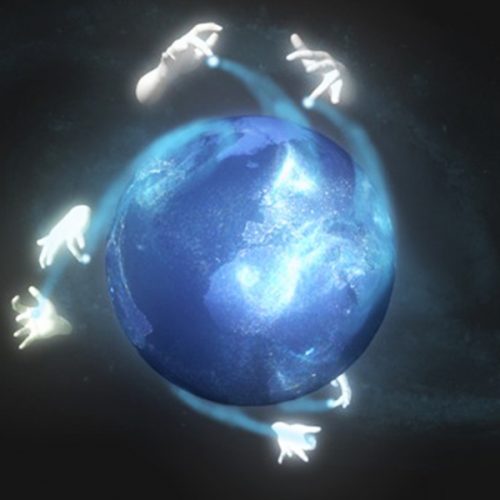 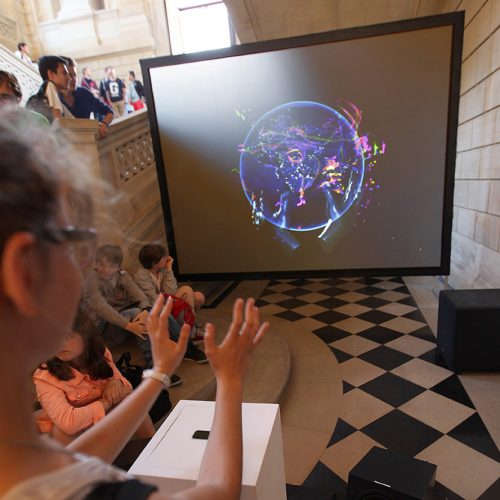 Emotion in Space seeks to re-imagine ways in which global real- time datasets can give us a unique perspective on the understanding of world motion through emotional currents emanating from 3200 different cities. Part of the Mechanics of Emotions series, this new work is a poetical representation of the ‘human factor’, comparing human affects with stock market data, forming part of the artist’s running critique on preeminent forms of data quantification.

In this interactive work, clouds of the world’s emotions rise from the cities, forming a spiral nebula around the earth. We move our hands around a virtual globe, mixing multiple streams of real-time emotional data translated into waves of sound. As we move towards each city- source however, the sound becomes that of a crowd, distinguishing the unique emotional character of the different conurbations. When further from earth, the emotion sounds dissolve into space with unlikely reverberations. On the projection screen, the visitor sees the globe in his or her own hands, which can delicately stroke human kind’s emotion clouds, uncovering the dynamic of the ‘World Nervous System’.

The finance industry was the first to benefit from the big data revolution, and as such, the art of governing the city has moved from the civic to the financial. Utilizing huge swathes of real-time online data news, this work reconfigures the notion of worldwide data towards the emotions of people in cities, translating their Internet data into an ad-hoc symphony of sound. In doing so, the work reveals how the emotional sensitivity of the planet might be the engine at the origin of political and economic mutations, or how, vice versa, these economic mutations might provoke deeper human emotional responses. This translation between human affects and the markets, and the work’s merging of the real and the fictitious is part of what the artist, Maurice Benayoun, calls ‘Critical Fusion’.

Stages of the emotional streams Flows of the world’s emotions rise and mutate when in contact with the real winds. Images from ‘Emotion Winds’ series, an on-screen precursor to Emotion in Space.

Emotion in Space is an interactive Internet-based installation playing with data streams, inviting visitors to collectively manipulate the world’s emotions rising in streams and clouds, emanating from 3200 of the largest cities around the globe, the visitor playing the resulting spiral nebula with the fingertips, as if conducting a galactic orchestra.

Projected on the screen: the image of the earth with streams coming from thousands of cities. They seem to escape the atmosphere to spread in the space like a huge spiral nebula. In the middle of the space: visitors are invited to interact. When moving the hand over the ostensibly empty stand, the visitor sees a virtual hand coming on screen closer to the world. The visitor immediately notices that fingertips touching the spiral streams reveal the sound coming from the related city.

Hundreds of thousands of data are collected from the web on a daily basis. These help build maps of the world’s emotions updated every 30 minutes. The resulting emotion streams leave the earth, carried by the winds of the world. Visitors play the emotion streams like the strings of a musical instrument. Their fingertips, tracked by Leapmotion sensors, contribute to revealing the nuances of these emotions. As we move our fingertips towards each city-source, the sound becomes a crowd, distinguishing the temporal emotional state of different cities. When further from earth, the sounds dissolve into space with unpredictable reverberations. The real time mixing of the different expressions creates a collective chorus. Listening to the resulting “concert”, visitors can fine-tune their actions in order to become part of the emotion symphony. Jean-Baptiste Barrière will compose the interactive sound creation.

The work interrogates concepts of data quantification, contrasting registers of data analysis with ‘the human factor’ to reveal new, if indeterminate or imperceptible outcomes. It thereby offers a theoretical counterpoint to general forms of data management and dissemination.

The work is about big data as a social and political statement, and explores the ways that all technologies related to data mining carry a predictive function: people analyze in order to make decisions and affect future human outcomes. In asking visitors to manipulate the data interface, the work examines big data as a controlling force – as a social ‘manipulator’.

Fully interactive and collaborative, this work becomes an art piece only when someone actively engages. There are different levels of interactivity: the work responds to natural phenomena, such as the wind, and to the physical movements of visitors, offering multiple layers of meaning. Any audience not participating takes advantage at the observation stage to understand the logic of interaction, appreciate the performativity of the work, and prepare to interact.

Emotion in Space forms part of the Mechanics of Emotions opus of work, an ongoing exploration into datasets and computerised quantification, that spans exhibitions in several continents over the past decade.