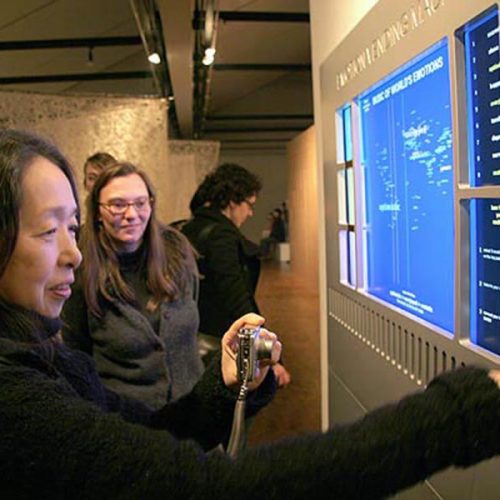 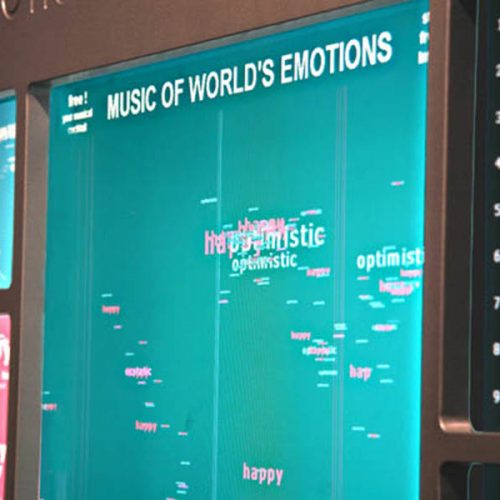 The Emotion Vending Machine is the 12th act of an opus including 15 acts : the Mechanics of Emotions.

The emotion vending machine is displayed like a vending machine for drinks or cigarettes.
Just as for any automatic vending machine, the user can choose among a list of products, here the emotions of the world are shown within the frame of dynamic cards reactualized in real time based on the web datas.If, for example, the user selects “scared”, “ecstatic”, and “terrified”, he obtains a musical cocktail. The resulting card, the mixing of emotions screened in real time, is read as a partition, based on an interpretation which the machine strives to decipher.
As for the drinks, the user can then plug his USB stick, his MP3 reader on the machine, and get back just as the drink in the goblet, the piece of remixed emotions. He can beforehand listen to the result thanks to the loudspeakers of the machine.With the music will be given in the digital format of a CD cover, the illustrated and dated card of the selected mixing.

exhibition From the Big Questions to The-Dump.net , Eesi, Poitiers, Jan. 2008,