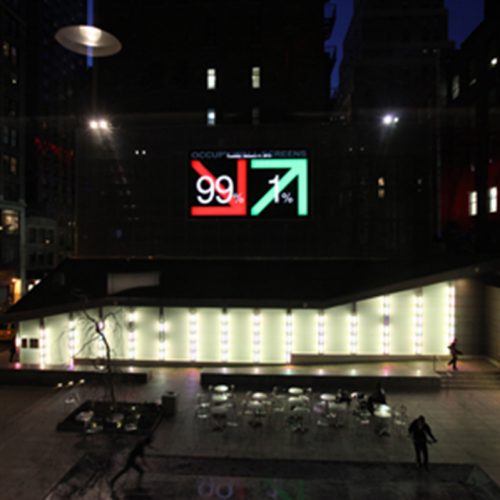 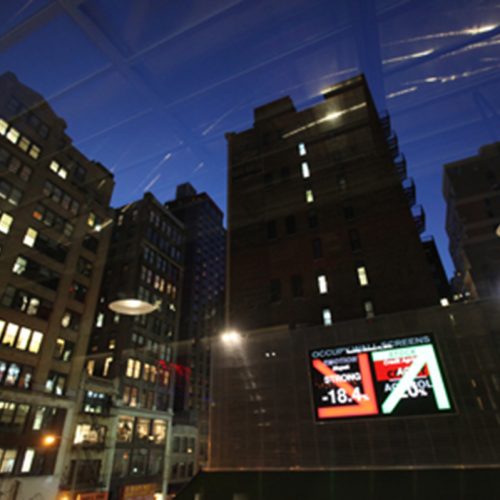 Streaming Museum, an international public art and online museum, celebrated its fourth anniversary on January 31, 2012, with the US premiere of “Emotion Forecast” and “Occupy Wall Screens,” real-time artworks by the renowned French artist Maurice Benayoun. The exhibition was on view for one month at Big Screen Plaza in New York City and through 2012 at StreamingMuseum.org.

The opening reception took place on January 31 at the Eventi Hotel’s Bar Basque, designed by futurist Syd Mead (839 Avenue of the Americas). Guests enjoyed dramatic views of the exhibition on the big screen in the presence of Benayoun also gave a lecture at Columbia University and Parsons the New School for Design.

“Emotion Forecast” and “Occupy Wall Screens” are part of Maurice Benayoun’s ongoing series on the “Mechanics of Emotions” which translate emotions into maps, performances, the Emotion Vending Machine, and sculpture relics of the world. (www.Digicult.it)

Inspired by the Occupy movement, “Occupy Wall Screens” displays in real-time the stock valuation readouts of major financial institutions next to emotional currents emanating from Occupy sites around the world.

Playing on familiar visual symbols from the financial world such as stock tickers and Bloomberg-style graphics.