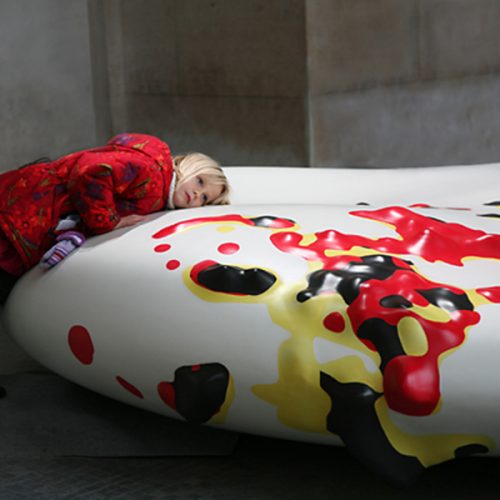 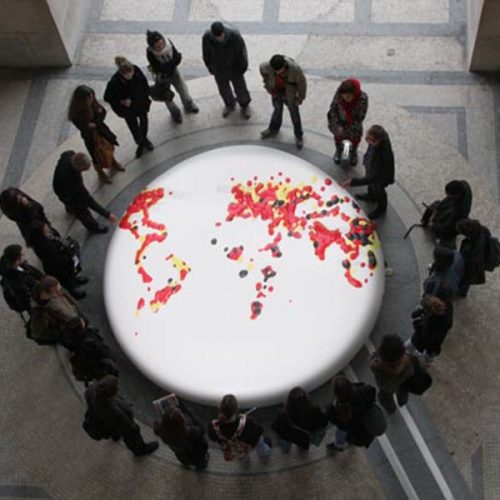 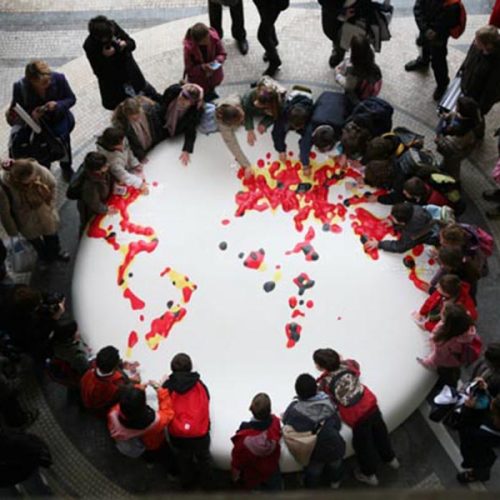 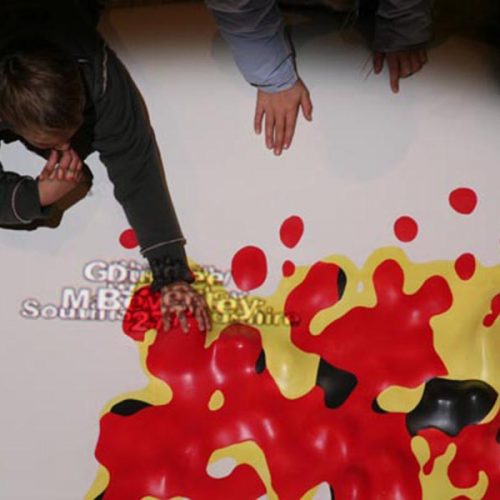 For its first exhibition, this installation by Maurice Benayoun was placed at the entrance of one of the biggest Parisian monuments: le Grand Palais, in the frame of the European city of Sciences show, November 14- 16, 2008.

Upon your entrance, you get into the Mechanics of Emotions, confronted to a sculpture which produces an infrasonic music when you touch it, composed by digital data coming from more than 3000 biggest cities of the world. Maurice Benayoun invites you to explore the representation modalities of the planet affects.

Still Moving, The Mechanics of Emotions

Still Moving is an interactive artwork, made of a fiberglass  sculpture of 3,5m diameter and 0,9m high, sound and video projection. When touching it, Still Moving produces a music made of infrasound (5 to 20 Hz) that you can only perceive with your body.

Conceived by Maurice Benayoun in the frame of a series of works on the Mechanics of emotions, this sculpture is built out of digital data, coming from the web analysis of the relation between 3200 cities around the world and a lexical corpus related to the emotions. Still moving is a snapshot of the map of world emotions, sculpted from internet data. Still Moving is presented as the deflated globe of an earth, whose relief wouldn’t be related to geology, but to emotional intensities variations spotted on the internet. This apparently still volume, is “still moving” when touching it. The infrasonic music depends on the geographic areas touched by the visitor. The data and graphic representations are projected simultaneously on the sculpture, making the interrelationships between the world, the digital data and the visitor’s movements intelligible. Public commission of the Ministry of Culture Délégation aux Arts Plastiques, the sketches for this piece of art become part of the Contemporary Art national fund (FNAC). Still Moving has been co-produced and co-presented by Arcadi regional support program of Ile de France.

The information conveyed by the search engines, brings us daily a system of responses, which is supposed to reflect a sociologic, geographic, scientific reality. But, this system is affected by a linguistic (English language predominance) and technologic (geographic predominance of industrialised areas) filtering. Which representation of the world can we obtain through the network? Too often considered as the world nervous system, the Internet seems to neglect the phantom limbs of the planetary system: Africa, becoming an archipel, is far from the reality of the continent, as an amputated limb, from which you would even not feel the ghost pains.

Mechanics of Emotions explore the world affects representation modalities, considered as a global body. This work interrogates the actual limits of the representation system and the new interpretative filtering process.

If you recognise yourself or a relative in one of the photos, please contact mb(at)benayoun.com