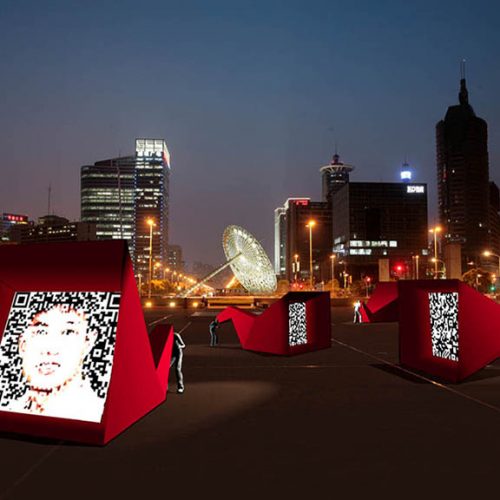 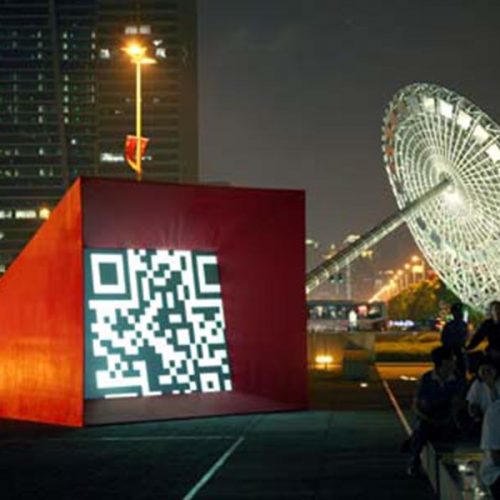 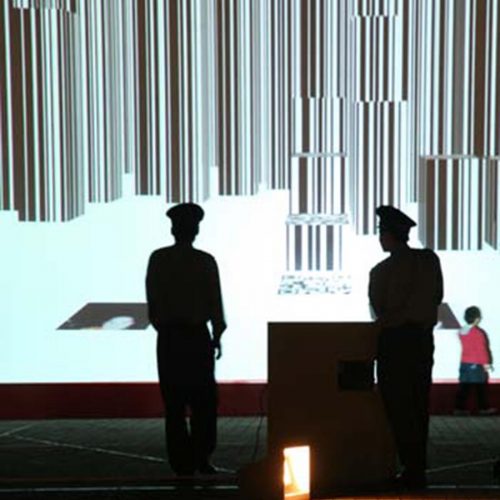 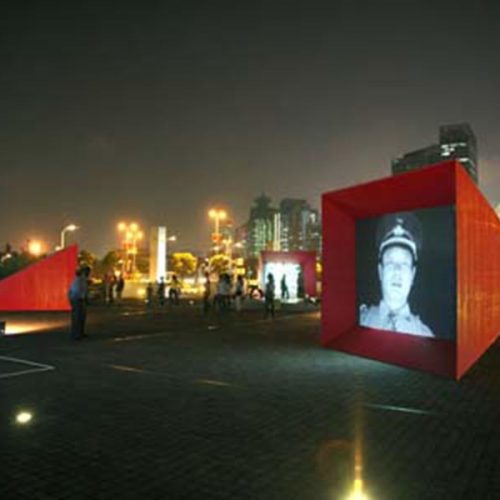 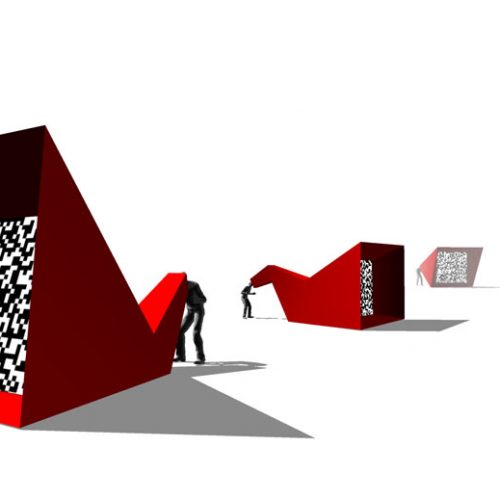 The city skyline defines the “profile” of the City. It is the visible part of its identity. At the same time, the skyline alters and replaces the horizon line, the limits of the visible world. The city is hiding the horizon by creating a new one. So “human” like!

The city is a place built by the people for the people, at the same time it expands and neutralises their individualities.

The process of converting everyone’s energy into a city is not a well-known one. Should people be seen as bricks of this edification? NeORIZON makes this process visible in a symbolic form.

The city seems to be invaded by the “IDWorms”.

The IDWorms, are crawling on the ground on Century avenue, Pudong, Shanghai. They invite people to have a look inside, then being converted into 2D (QR)Codes which are an apparently neutral way of identifying people and objects. They all look the same if you don’t know how to decipher them.

On the main screen a city landscape (IDscape) is being built out of the black and white pixels of the personified IDCodes.

On the Internet, everyone can get its own 2D code and use it as a personal signature that everybody will recognise by using cell phones as though they were identifying mass consumption products.

In Maurice Benayoun’s work, urban installations are the most visible part of what the artist calls Critical Fusion, introducing fiction into reality to improve its transparency. NeORIZON is one of the works that introduce hints to help and decipher codes of our daily lives into the physical space.

The IDWorms are odd beings that live in the city, showing off their red shape on Century Avenue. Many of them are crawling in the street.

Their shape is a geometric volume with a small end – which makes you feel it looks like a mouth, a mouth swallowing visitors identity – and a large end that is made up of a big rear projection screen.

At the small end, at the visitor’s face height, people come to have a look inside. They don’t immediately understand that their face will be converted into a 2Dcode.

At the larger end, a screen displaying giant black and white pixels. Sometime a face (the one coming in front of the small end) shows up that is quickly converted into the surface of black and white dots.

These worms seem to have a job to do: convert people into signs to make them definitely recognisable.

There is no entity, objects, animal or people that will escape from tagging.

What if we are recognised by an QR Code like any object of consumption?

Analysing our image, the IDWorms convert us in Codes that we will be able, after downloading the software on the Internet, to read as the best way to know about the people we meet.

On one side of the place on Century Avenue, Pudong, Shanghai, where the IDWorms crawl, a giant screen, visible from the same angle displays a kind of city landscape that perpetually grows.

At the bottom of the screen, the ground moves away like a long surface of fabric mapped with thousands of ID Codes (2D codes built out of the visitors’ face) representing people captured by the IDWorms. The visitors IDcodes have been converted into the very texture of the city. The one the city will be made of. As the IDcodes are moving away from us like a continuously growing roll of fabric, some of them are extruded from the ground, becoming cubes and volumes, converting the ground surface into a growing number of buildings. People are converted into a city that will never end growing.

Either a sculpture or a processing machine, the IDWorms are doing this very specific filtering that makes an artwork become an enlightening experience talking to the people about people.

The resulting image must give the impression that IDCodes are becoming the skyline of an ever-growing city, hiding the horizon.