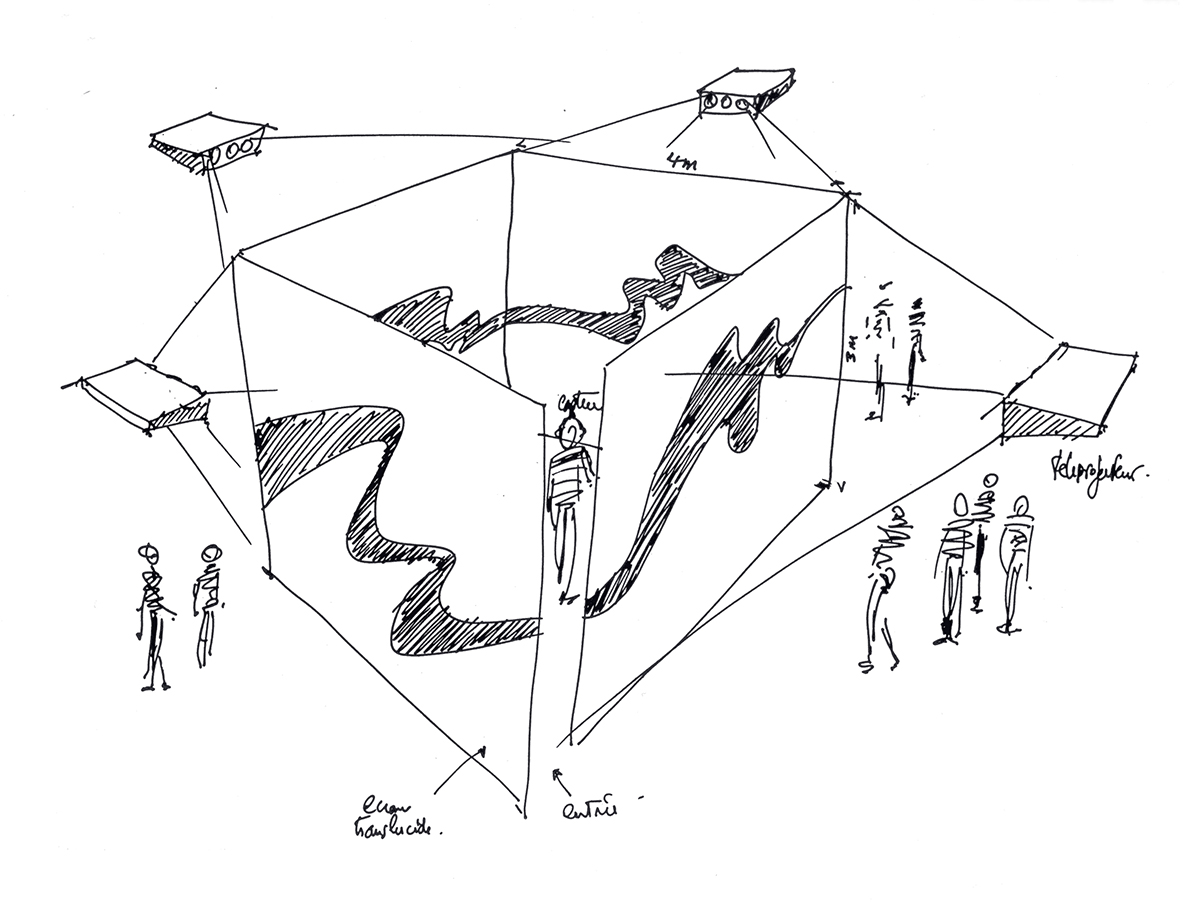 an art collection concieved by contemporary artists for virtual reality

Is there thing such as Art After Museum ? Cosa Mentale

Back to the cavern (contemporary wall art ?)

Art After Museum is a living place for different artistic works.

Works put together because of their capacity to evolve in a site with highly specific constraints.

Works are built as computer databases. They are immaterial phenomena which must get the best from the novel potential of their host site.

Art After Museum can be created in numerous physical sites. Each elected site can host a different selection of works. The number of works integrated is variable and evolving.

During the initial phase, artists who are asked to produce works will be artists unfamiliar with  the technologies used. They will be selected according to their ability to take into account the space in which they work.

Art After Museum is not COMPUTER ART. Computer technology is merely one of the conditions whereby such an art was born. Artists will not be asked to possess any specific skills in the chosen technologies.

They will not necessarily be in charge of the technical aspects of making the art works. They will fully control the fabrication process.

Each work may exist in several instances. Conversely, the artist may agree to there being a single work.

For the spectator : the picture is the shadow art casts on the visible world.

OPUS IN MACHINA > IMAGO EX MACHINA The MACHINE is one of the WORK’S MEMORIES . Yet, it remains independent of the work. It is a visualization DEVICE of the SAS* It is neither the work, nor its support. THE MUSEUM IS THE DEAD MEMORY OF ART.

ART AFTER MUSEUM IS A LIVE MEMORY . Contemporary art is no longer an hostile environment. Art After Museum is an hostile environment. It is heterogeneous compared with the surrounding space. Special accoutrements are required to explore this Environment, and it is necessary to pass through a communication SAS. Is Art After Museum stifled or liberated ? Is contemporary art stifling or liberating?

Art After museum : a breath of fresh air ? A black hole ?

EXPLORING is not the same than VISITING.

The art EXPLORER is an active SPECTATOR .

Unless the artist wishes otherwise, the spectator is not the maker of the work, but merely its casual or willful witness.

The way he or she explores the works constantly changes. From one exploration to an another, the representation alters and the work remains.

The Art After Museum work has its own inherent life :

it can move, self-generate, self produce, reproduce, metamorphose, age, disappear, change scale, change space, change time, dialogue with the outer world, communicate with other Art After Museum sites, and it also can modify as a function of the various explorer’s approaches. Gather works which transcend physical laws.

In this case, the work is no longer the result of a struggle between artist and matter : it is A WORLD OF PURE REPRESENTATION.

The submerged explorer moves around/inside the Art After Museum world.

Audience stay outside : spectators can observe the outsider events. They benefit from the explorer’s experience. Images are invisible and reversed for them.

These images are neither VIRTUOUS nor VIRTUOSO

they are like satellite shots of a world yet to be invented.

The visualization device (SAS) is linked neither to the world, nor to the Art After Museum . It is a temporary device, bound by current technological limits. Works, which are independent of the machine and visualization device, may be explored at a later date by other means considered more user-friendly, more accurate, experientially richer, cheapier, more challenging, more tactile, more sensual, etc.

The explorer proceeds from one work to another, moving toward the icon representing the work which has to be explored. Outside its actual observation space, the work, may be represented in various guises at his maker’s whim, allowing its localization. Such indicators may consist of :

Unless the author specifically wishes, the various works cannot be seen simultaneously. At most, their representative icons may be presented in the same time, allowing the explorer to choose a path.

The sensor equipped explorer’s movements through the SAS condition his or her subsequent movements in the Art After Museum world.

Exploration of a given work calls for precise, often delicate movements. Shifting from one work to another calls for greater amplitude of movements.

Space /time distortion : the spectator’s real movements is not proportional to simulated camera moves in the Art after Museum world. The spectator’s movement is relative to the one of the cameras.

The retina is fortuitously located in the trajectory (virtual picture) of the projected image, the light beam.

The projected images are : THE CONTINGENT, NOT NECESSARY MATERIALIZATION OF THE CONCEPT.