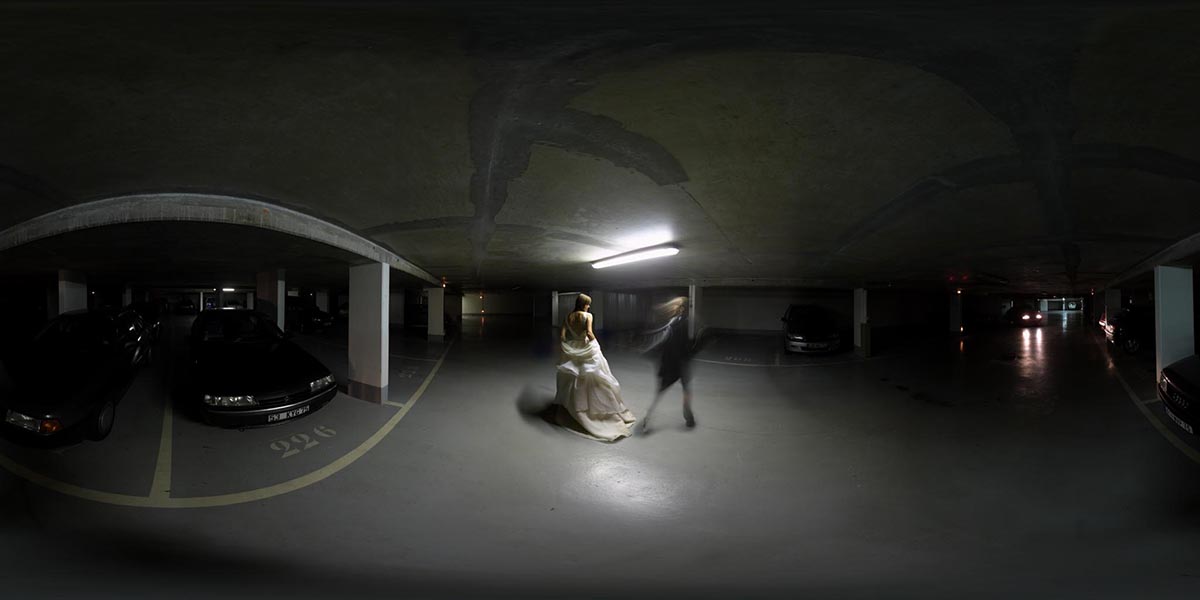 So.So.So. is an interactive installation by Maurice Benayoun that plunges the onlooker in the middle of the moment the one of photography which reveals a complex network of characteristic signs from our own experience of reality. What the visitor finds with the help of VR binoculars is a series of spherical panoramas which depict a moment, the same one, at 7.47 in the morning in different places involving different persons in different situations.

As a matter of fact, on a wide screen -being discovered by the audience outside the action- is the trace of the onlooker’s eyes painting the path of each visitor at their own pace. This is the ‘Collective Retinal Memory'(1) , a writing space, a dynamic palimpsest, in which, for some time, spreads out the story of the discovery, a particular reading that becomes a collective experience then. It is on the screen that can be seen the difference of the interpretations readable through the story of the moments of the individual attention.

From the Internet other readings are being developed simultaneously. The same pictures can be seen on line. The path of the Web users is written onto the Retinal Memory that becomes unique, displayed in real time in the exhibition and on demand on the Net.The shared writing space and the confronted looks make So.So.So. a thrilling experience in which the obscenity of the others ongoing looks is unveiled by the CRM that, so doing, uncovers the intimate tropisms. This obscenity competes with the necessary complicity which reveals itself amid the fusion of the looks in a collective dynamic picture. In this non linear apparatus, the linearity of the narrative is built up by a chronology of individual experiences that erases an older trace, for a better transcription of a real time of the action.

Fiction blurs in a reality that it gradually pervades. Through their own paths, and in search of a meaning, the onlookers create explorations that are as many readings of the narrative. When their looks move from one clue to another, they then rearrange the chaos of information into an actual interpretation. That individual reading, creates the new linearity which characterizes the fiction we know through a trace that is spread out at the surface of the Retinal Memory.

The literary narrative, like the movie narrative is a written trace, intentional, organised as a discourse. The trace left by the user on the Collective Retinal Memory is a unintentional trace. Like the ephemeral print of our steps in the sand, it tells us were we have been and what we lingered over. But, like the foot print, it vanished, erased by the time or by the new traces left by other people. This dynamic narrative inverts the narrative process. Facts exist before the text and even it results from their discovery. Reading becomes writing. Intentional or not, clues that fill each image/scene become anchors, letting in a story that everybody call tell himself and that the Retinal Memory bear witness. The synchronicity of the so presented events (7:47 am) contribute in telling a story that doesn’t go on, all of it written at the present time. The virtual is not any more in the technology that defines it. It is in the apparently undefined number of paths. It is in the ghost highway where we would expect shortcuts and not too beaten paths. Our experience of the world is not so different and to living on the world is to interpret forever. That means to create links and connections between facts and things. To extract meaning from the surrounding chaos. Narrative is a peculiar intelligence of the world. The script is its transmission.

In the closed world of the fiction, there is a crime, necessarily. The accident justifies the attention. This is a hitch in the apparent daily life continuum. Sometime the crime might be the lack of hitch and moreover the fact to show the world as an organised dullness of its appearance. So.So.So. is the exhibit of a crime hidden by the anecdote and the banality. The tragedy is probably the fruit of the conjunction of the impossible achievement of the narration and the ineluctable finite of the duration of the show as well as the one of the duration of life.

Narrative fields are superimposed. Everything leads us to think that the story coming from the given scenes is in the frozen present of a unity of time which is, converted in space, the one of photography. As visitors, we are trying to find out how the characters are involved in a common story that sounds so common if we look at the surrounding environments. The sound work follows the same logic. In space, the interactive music composition by Jean-Baptiste Barrière mixes facts, superimposes clues. One can spot in the sound the obsessive presence of information, produced by the medias. Radio, the sound from TV that, like the leitmotiv coming from the press, reminds us that another story introduced as the one from the world, is going on, less intrusive but far away: a sniper in Washington, Chechens in Moscow, a front page with Saddam Hussein close to the one with G. W. Bush or Charlie Chaplin playing a Dictator for light opera. Two possible stories so far, the trivial story of our immediate experience f the world and the one of its media transcription. Where stays the real tragedy? Probably elsewhere, in the vanishing of author, ghost apparition in parking place, footprints left on the beach sand, far away from the world and from the time, as if he wanted to escape from having to tell the story , to live, finally, its own story.

(1)The ‘Collective Retinal Memory’ was at the core of Art Impact, Collective Retinal Memory , the first installation using this concept, displayed at the Pompidou Centre in 2000. We enabled the audience to explore La Beauté , an art exhibition in Avignon, 2000, featuring a series of art installations among places with no aesthetic intentions, a supermarket, a slaughter house, a quarry. They could investigate the confrontation of both matters reduced to the level of the retinal seduction level, as a tribute to Marcel Duchamp. 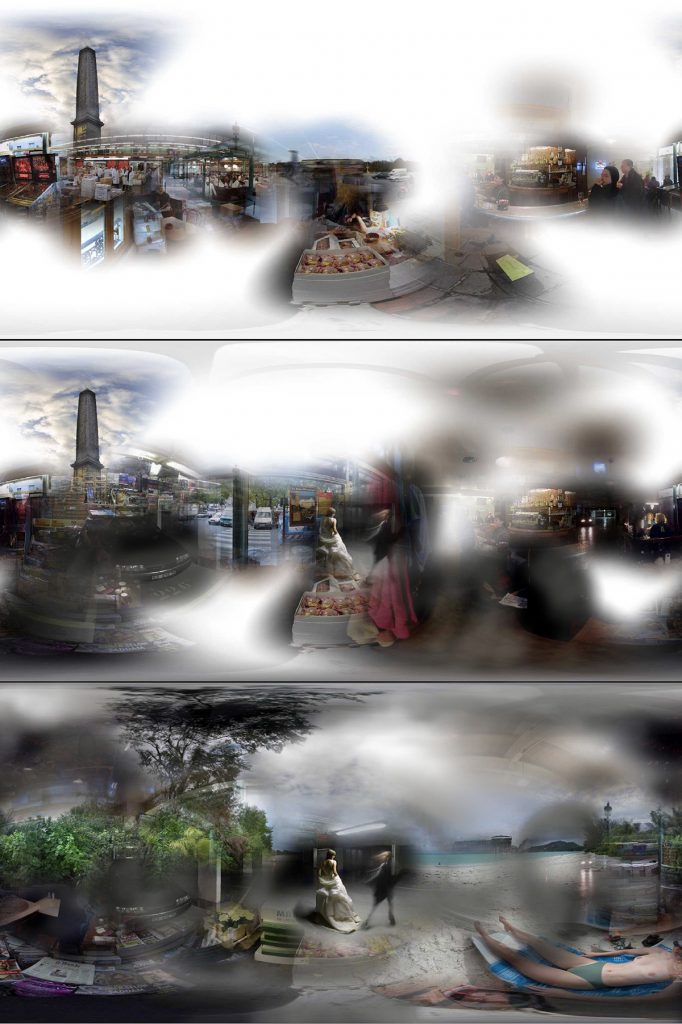