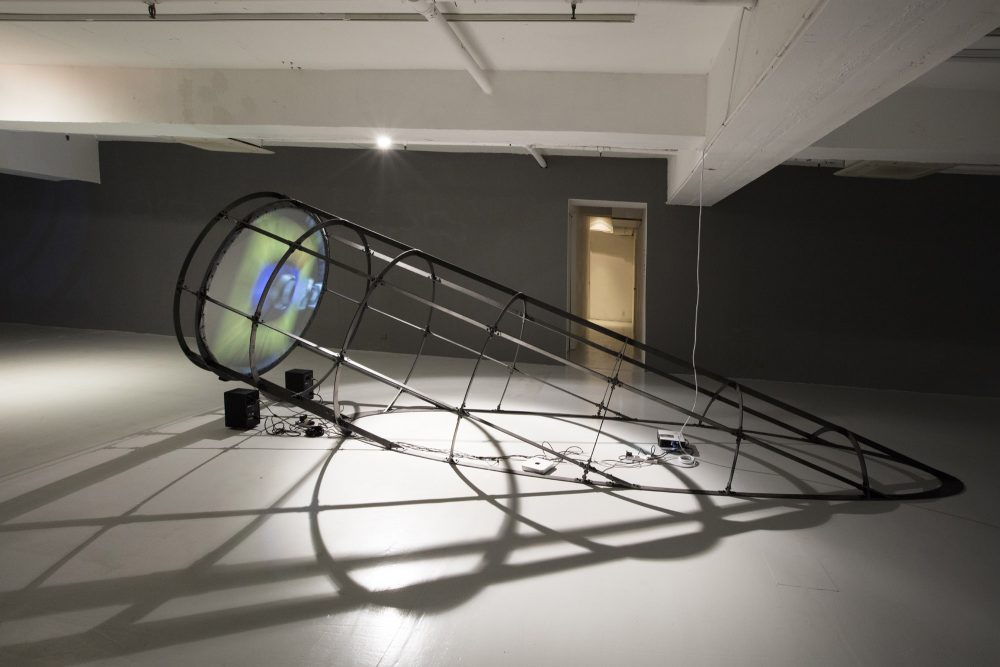 The exhibition JUST DIG/IT! presents for the first time as large-scale installations, Inside the Tunnel under the Atlantic (1995, video, 22″30) and Inside the Paris-New Delhi Tunnel (1997, video, 13″). Presented will also be Tunnel Shots, produced at the Pompidou Center during the exhibition of Tunnel under the Atlantic (1995), never before shown to the public.

The Tunnel under the Atlantic trailer, video samples of the original digging in 1995.

Artist’s statement on Just Dig It Exhibition at Osage Gallery:

When communications create and utilize a woven web of connections and when people feel they belong to something bigger than the global village, closer to what could be a global body, we discover the real obstacles and barriers that keep human kind apart. In 1995, twenty years ago, when nobody was sure the web would become a substantial part of daily life, the Tunnel under the Atlantic connected the Pompidou Center in Paris and the Museum of Contemporary Art in Montreal. This inter-continental virtual reality installation proposed by Maurice Benayoun AKA MoBen (莫奔) was more than a mere video conferencing experience. The materials that visitors had to dig through from either end were cultural materials, made of images, paintings, sounds, maps. Beyond the physical distance, a cultural distance had to be dug. It took more than 5 days of digging before the first meeting between those in Paris and Montreal. The gesture of digging suggests not to forget about history but to know it better, and to be able to build on new common grounds.

Beside the living memory of the 1995 and 1997 tunnels, Colors/Border Tunnels (2016) introduces the visitor to the process of connecting through data via the Web, and poses the questions of how the image of borders is conveyed by the Net, how colors, symbolic of race, religious, aesthetic representations, so often related to a superficial vision of the world, reflect real tensions, social and political issues, and what the different factors are which “color” the information that we see, and filters that which is accessible and prominent in our cycles of attention – ultimately, how we view and connect with one another.

In 2016, when the web is the most established means of exchanging information, and what appears as more easy, facilitated communication and connection, have our cross cultural/political understandings improved? Is there such thing as a “common”, universal body of data? Colors Tunnel and Borders Tunnel reminds us of what “distance” means between people when it is more than a geographic challenge. Colors Tunnel and Borders Tunnel can be a transient method for the creation of a cross-boundary, cross-cultural, cross-social and cross-political space for dialogue. Yet, tunnels are not short cuts. The process of carving, and digging through complex and abundant information and the effort that it takes is key.

Digging through images to cross borders, all over the globe, exploring a rainbow of colorful pictures is a way to go beyond appearance, where the symbolic and physical frontiers need deeper investigation to rediscover the true meaning of distance and the real potential of dialogue.