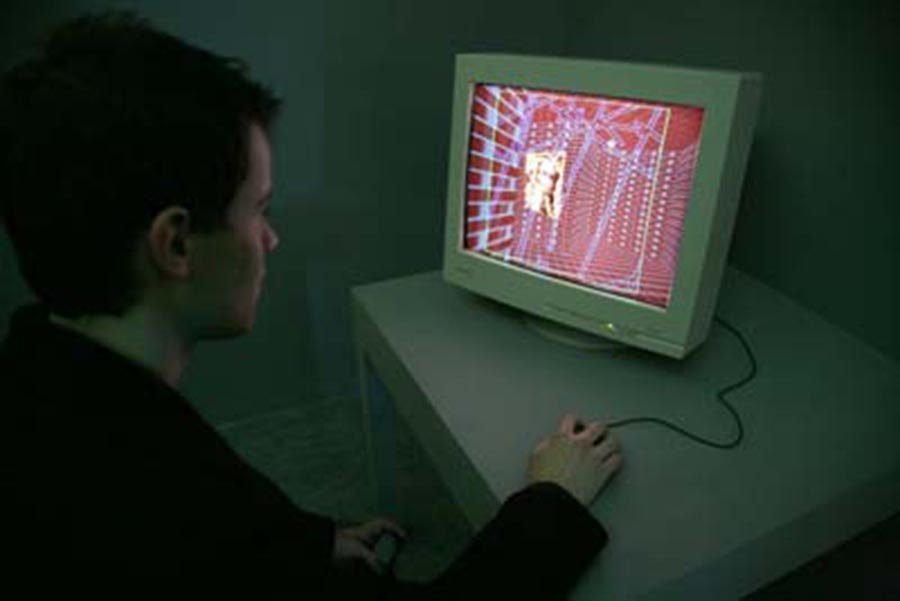 n November 1994, during the Artifices 3 biennal which presented, in Saint-Denis, twelve interactive artistic installations, Maurice Benayoun proposed his first virtual reality installation : Is god flat ?
Withdrawn from the world, in a virtually monastic cell, the spectator pursues his obstinate quest of the image of God (of all gods). Facing a small scale screen, he heads forward in a world of bricks. The walls in front of him grow hollow as he moves on. When he decides to change direction, he defines a new corridor. Therefore an architectural space builds up, determined by the visitor’s progression. Each new corridor reveals to him representations of God drawn from the history of art of different cultures. According to the quality of the visitor’s approach, according to the rhythm of his stroll, these utterly plane representations move towards him, grow larger or move away.
By digging the walls which seem to limit his skyline, the visitor of Is God flat ? sets to work two processes : the updating of the collective memory of our humanity (the remains of the image of their creator by the human beings) and the building up of a cumulative knowledge anchored in the collector’s process (accumulate as many images as possible), requires a more attentionate approach (contemplative or analytical), to end up by loosing its object : by being too close, only the visual materiality of the vision survives (the framework, the pixel). The restoration (to restore in english means to reread computing datas in memory) images revelead by the opening of the corridors,by bringing up to the memory hidden representations, is part of an iconological excavation. Its persevering realization is part of an initiatic path. This revelation shifts its object (God) reduced to its image (man) in order to wear out its materiality (pixel). It goes back to the desperate reregistration of the representations, surface effects of the memory.
First exhibition: Artifice 3, Saint Denis, France, 1994